One Year of Quilts (with some education stuff thrown in)

One of my recurring fascinations is with education research and the brain (handy that it's my job, too), and something I've read so much about in the last couple of years is the importance of grit or determination. A kid can be a genius, but if he gives up the second something is difficult for him, then his genius doesn't matter at all. We talk a lot in my district about how to instill this grit into our students. This, after all, will be the edge that sets them apart in college or the workforce for the rest of their lives. It makes them problem solvers and not quitters.

I'm oversimplifying here, but instilling grit in students (or our own children) means putting tasks in front of them that are hard. It means congratulating their failures (rather than punishing them with bad grades or scowls or whatever) because they learned something from those failures and are one step closer to solving a problem. It means providing just enough support to push them to success, but not enough to make them comfortable.

The second part of my theory regarding grit is that we, as adults, don't usually choose to do things that are hard or that we're bad at. I know this is true for me. I find some disconnect - dare I say hypocrisy - in the fact that we want our kids to try and fail and branch out and learn, but we really like our comfortable situations. In short, I think I've gone most of my adult life without learning to do something new. I used to joke that before I retire I'd like to teach Algebra because I can't imagine anything farther from my comfort zone of teaching. But don't suggest that I would do that now -- what if I'm not immediately good at it? That would be terrible!

So I set out to change that in 2014. First, with the encouragement of some great friends, I signed up for a mini-triathlon. There's a half-finished, unpublished blog post somewhere about it, and it was an awesome experience.

I also decided to learn how to quilt. I chose quilting because if my house were burning down, one of the top five things I would grab is this: 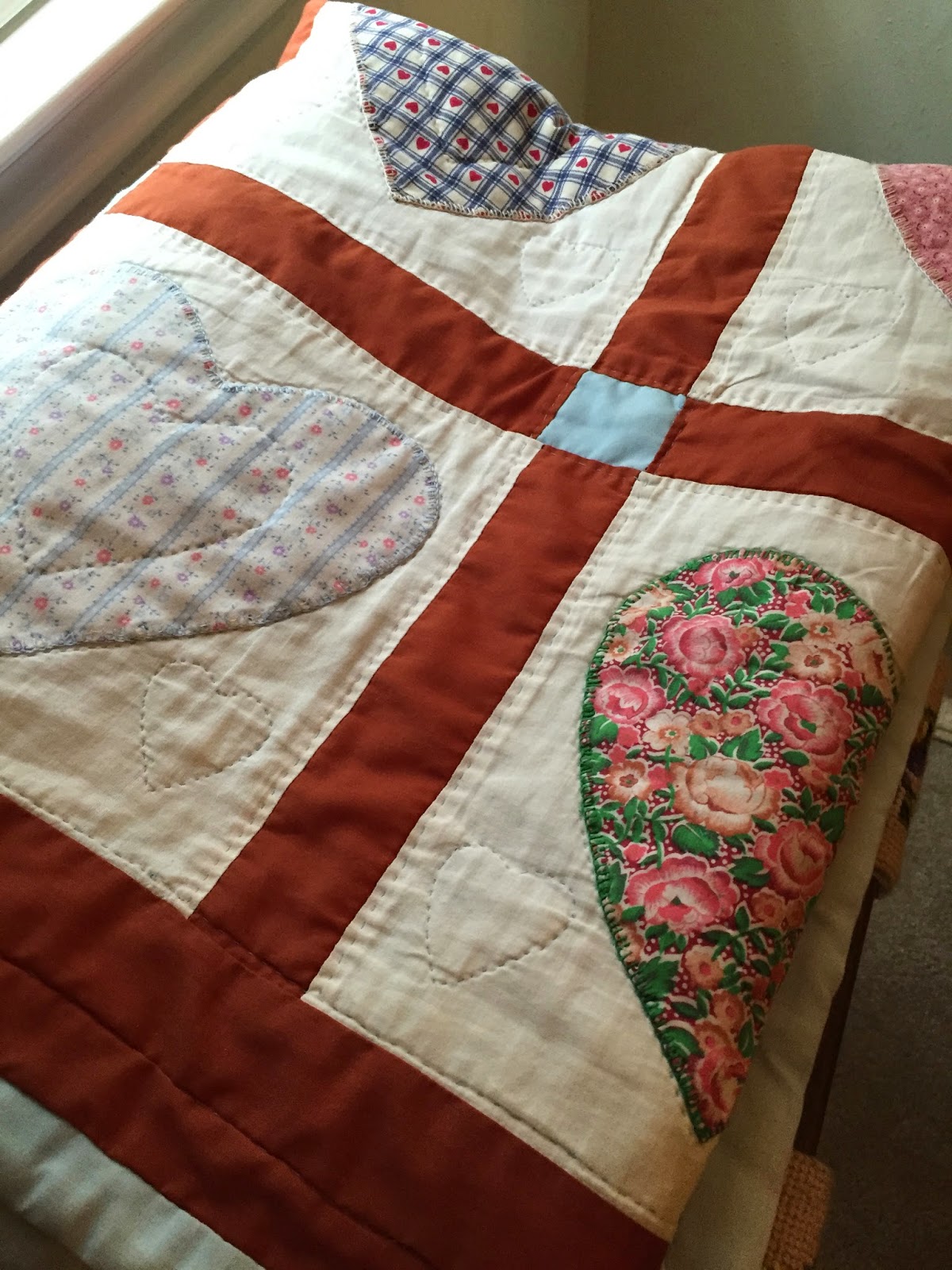 It's a quilt my grandmother made. When I moved out of my parent's house to go to college, I may have "accidentally" packed it. (My mother might use the word "stole" but that's a little harsh, I think.) Since then, we've lost my Mammaw, but I still have this quilt and I think of her every single time we use it, which is probably daily. Quilting isn't eliminating hunger or anything, but it's something with a lasting impact. Something that will (hopefully) go on beyond me. After I made a practice quilt, I set a goal to make eight quilts, one for each of the adult women in my family, and give them for Christmas. It seemed a little crazy, but it kept me going because I had a goal.

This is another little part of teaching our kids and our students grit. If their work -- this hard, failure-creating work -- is related to something they are invested in, then they are more likely to stick with it. To keep trying. To work harder and learn from mistakes.

And so, armed with a new sewing machine, I started quilting. First I read articles and watched YouTube videos. Several people have asked for which ones I watched, and it was so long ago that I'm not sure I remember them all. I'm posting a few here that look familiar and I think are good:

The biggest question I've gotten from people is about the actual quilting on the machine. Many people make quilts but send them off to be quilted, which can be very expensive. I was determined that these quilts were going to be 100% done by me, and since part of my original mission was to do something difficult I decided I had to do the quilting, too.

My friend Erin had the best advice. She told me to take a section at a time, get comfy, have a glass of wine, and just go. If you're too stiff or too worried about perfection, then you're asking for trouble. Just go. She also said that quilts are what you make them. In other words, it's your quilt, so if you like it then it's not wrong. This was probably the hardest advice for me to follow. I like to plan and control and follow the directions, so the freedom was tough. More than once I sat down to quilt and after about five minutes decided I couldn't right then because I was wound too tight. Most of the mistakes I made (that had to be ripped out and redone -- and there were plenty) were because I was trying to force myself to get a certain thing done even though I didn't really want to right then. Patsy Thompson has a four part tutorial that's pretty long but got good details. You'll see that I chickened out and straight-line quilted all of the first quilt and the first part of the second.

Before I post the pics I also want to mention that these are far from perfect. Really expert quilters would likely look closely at them and see technical flaws -- uneven stitching in places, a repair here and there, etc. I know they are there, and I'm okay with it. See, I'm not an expert yet. I'm still learning, and not being perfect is part of that. Maybe some day I'll get there!


There you have it!  One year of quilting and learning! I can't wait to get going on my next project!