The Fishing Trip that Wasn't

I know that you all know this, but I'll say it anyway.

Trey totally takes care of the three of us. We all know that no matter what Trey will just make sure we're all covered.

But nothing makes that more evident than a funny-in-hindsight minor family crisis in the middle of the ocean.

It all started weeks ago as I obsessed about what we should do in Cabo San Lucas on vacation. The boys have taken a new interest in fishing, so I thought it would be a great idea to take them deep sea fishing while we were in one of the world's best fishing spots. We all talked about it and agreed it'd be a grand adventure, and I booked the trip.

Because of my obsessive need to plan things, even while I'm off work in July, I then started working on various contingency plans for the trip. I'd booked a whole day, but worried that may be too long. So I talked with the fishing charter guy and he said he'd refund the difference if we came back early. I planned for potential seasickness, researching home remedies, natural remedies, medications. I'd been deep sea fishing before when I was a teenager and didn't have a problem, but I did get really sick on our honeymoon cruise (yep - best wife ever). I collected an array of motion sickness bands, dramamine, non-drowsy dramamine, kids dramamine, gum, etc.

We just knew we were going to catch a big one!  We were so excited!

We woke up early that second morning of vacation -- 5:00 Texas time -- and took a taxi to the marina where were ordered breakfast to go from the nicest lady at the nicest place. Keaton made friends with everyone, chatting and telling stories. We signed in with our charter and brimmed with excitement over what was about to come. 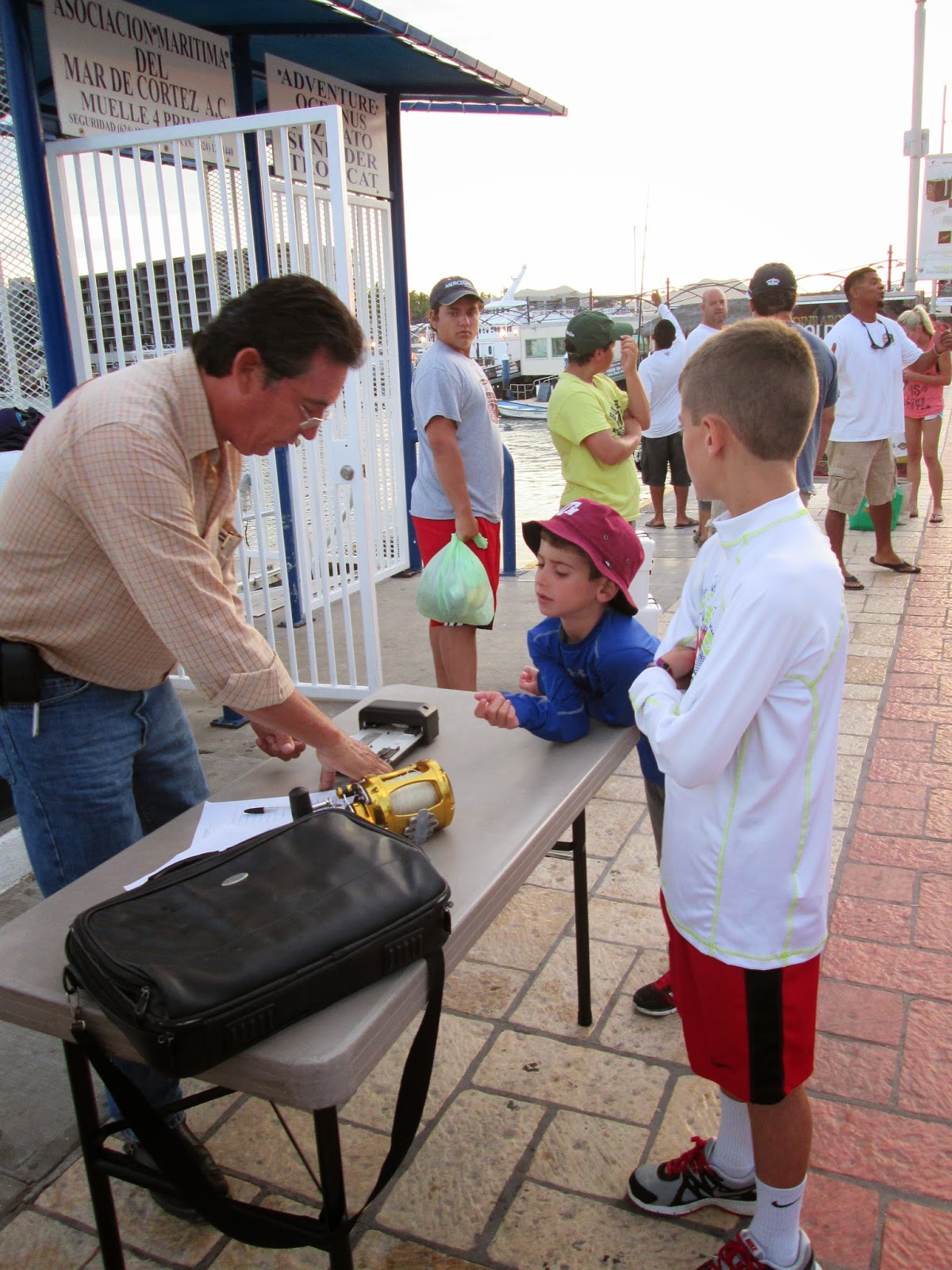 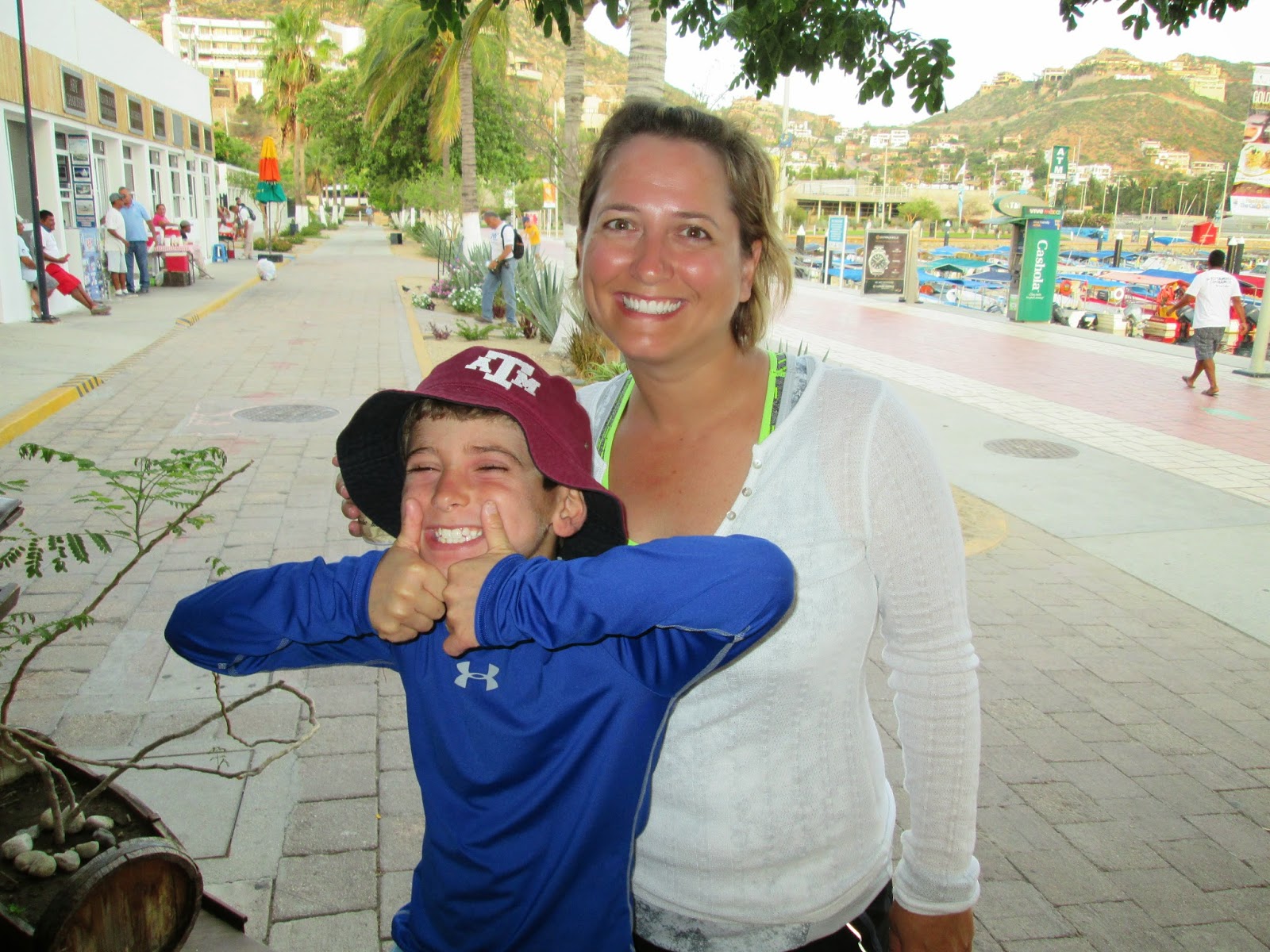 Then we boarded the boat. It was yellow, my favorite color, so I remarked that it must be our lucky day. I immediately noticed that there were no life jackets for the boys, which I had asked about. I remembered the response from the charter company, "We will have all required safety equipment," and kicked myself for not inquiring further.  Then I reminded myself that people fish like this all the time, and decided not to get too worked up about it. We all took our non-drowsy dramamine preemptively and ate enough not to be too full but not to have empty stomachs.

The view as we left the marina was incredible. I was kind of awestruck by the grandeur of it all. The fact that I had the opportunity to be here with my family, that this beautiful creation even exists. I took this picture of Trey and Keaton, not knowing that it was a sign of awful things to come. Look at the kid's downcast face. 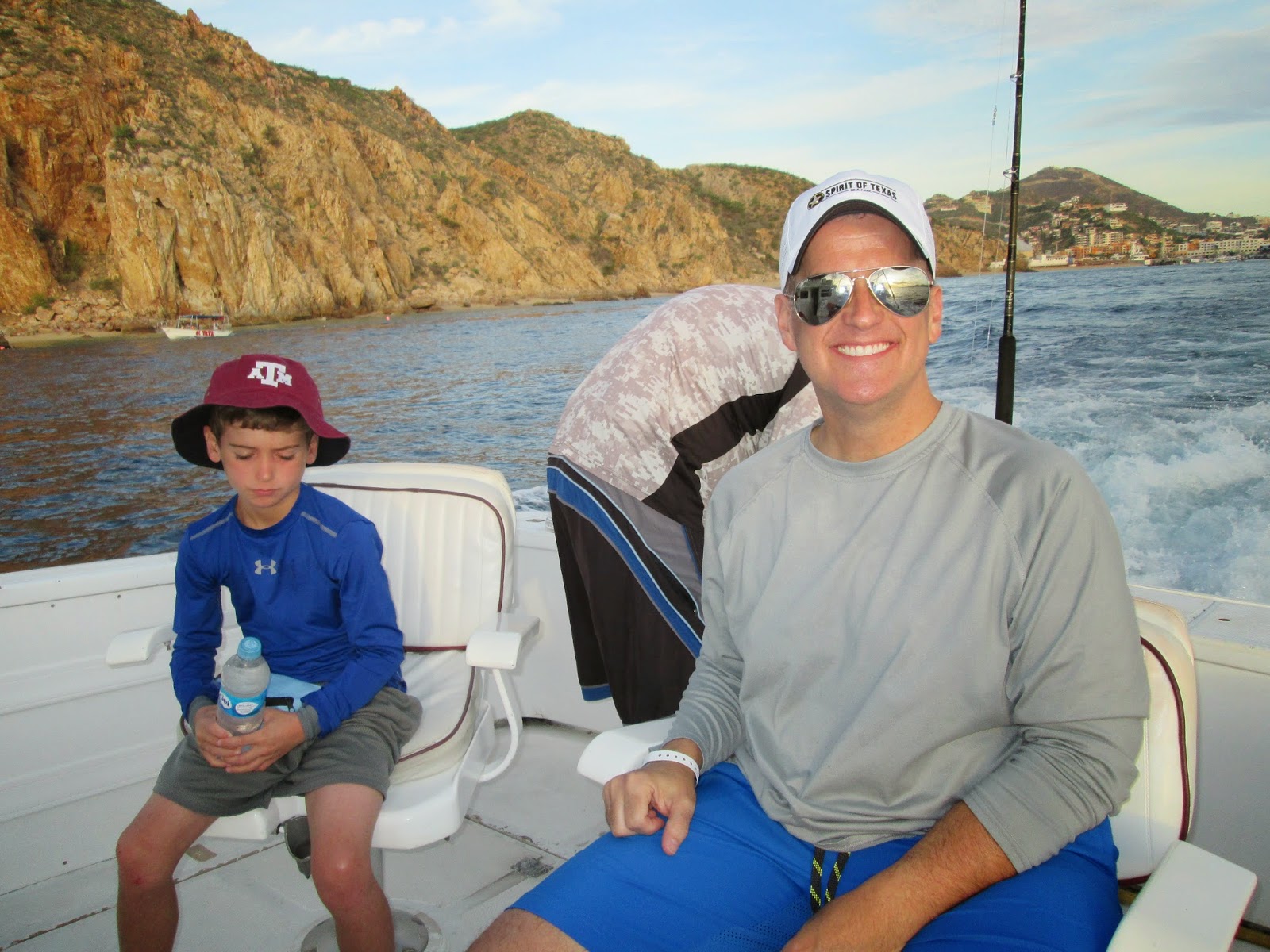 As we entered the open water and the boat increased its speed, Keaton panicked. I mean, PANICKED! He freaked completely out. He was screaming and crying and trying to run below deck to save himself.

Now, Keats has always been a performer. When he played soccer, it was like he was playing the part of a soccer player in a movie. He constantly talks out loud performing scenes of imaginary travels or adventures. You should hear him in the shower! As part of this, he's learned to compensate for being afraid or anxious by simply pretending to be over-confident and awesome. He just acts okay when he's really not, and he's good at it.

Only being the ocean going full speed over giant waves without a life jacket was too much for him. He couldn't pretend anymore, and he went nuts! For real. The crew members were so kind, and they offered to slow down or go some place closer. We told them we were sure he would calm down once he realized everything was okay and encouraged them to continue.

Trey followed Keaton below deck and I started to pray for him to calm down. I prayed that peace would overcome him. That he would be able to appreciate the beauty of this day and this place. That he would have a day he'd remember for the rest of his life.

Miraculously, after about ten minutes of death cries from the poor kid, I realized he was quiet. He was still forlorn, but no more screaming and trying to flee. Things were looking up.

Then the puking started.

Keaton was green. He had his head over a bucket and couldn't stop puking. I made a move to go and help him, but realized my stomach wasn't...quite...right. Trey had it covered, so I decided to stay where I was in the fresh air and focus on positive things to settle myself down a bit.

After a few minutes of Keaton's continual heaving, Trey came and asked if I thought we should turn back. I said, "Let's think about it for a minute," unwilling to give up just yet, and turned my face toward the fresh ocean air.

Then I began vomiting over the side of the boat.

I'm not sure what all happened next. I know Trey talked to the crew. I know I hoped really hard that he and Tucker were okay because there was no way in hell I could move from where I was to help anyone. I vaguely remember thinking that this was the worst I'd ever felt in my life and just wanting to lay down. I also remembering being really, really afraid that my legs had completely stopped working and that when we finally docked I'd be unable to stand up or get off the boat.

At some point Trey took my bucket, and I realized Tucker had succumbed to seasickness as well. I also remember not caring that much.  #bestmomever

There's nothing quite so humbling as watching a deck hand mop your vomit out of a bucket.

When we passed back by the famous El Arco de Cabo San Lucas, the deck hand asked if we wanted to take a family picture. I shook my head and we cruised on, headed for the safety of solid land.

But because Trey is the best husband and dad ever, he took these pictures on The Fishing Trip that Wasn't. We've decided to all forgive him. Somehow Tucker escaped the camera. 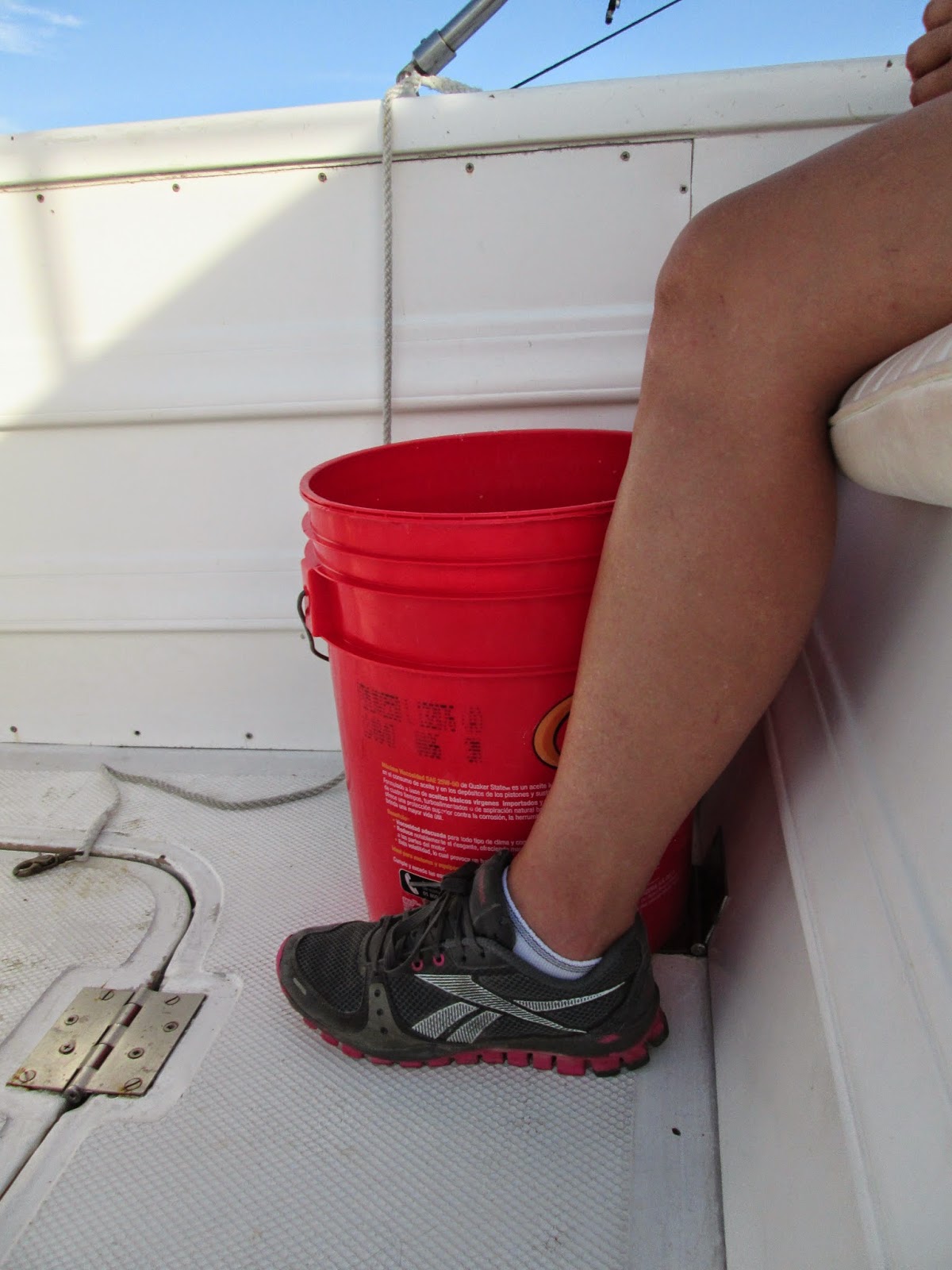 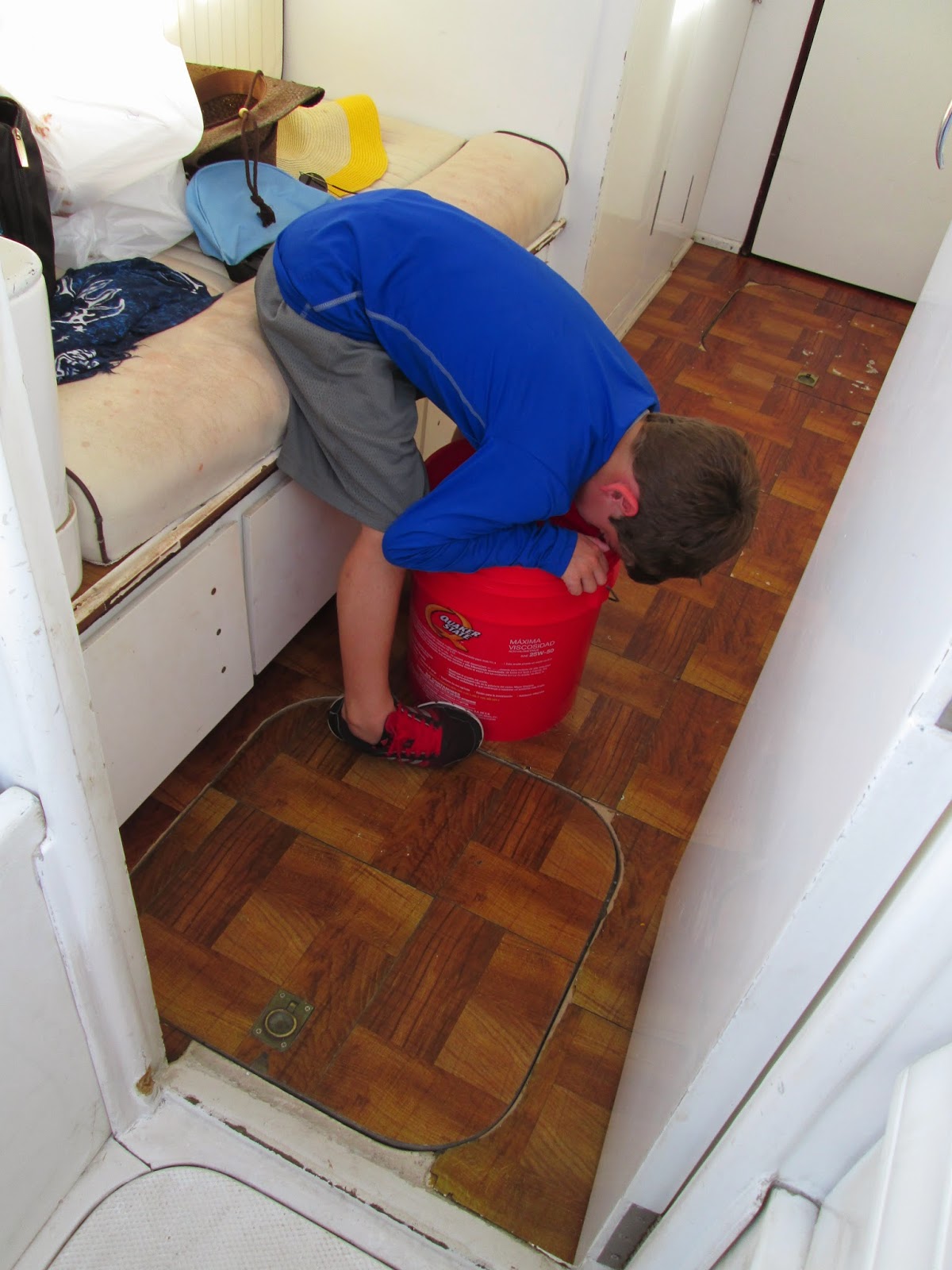 We docked. I shocked myself by actually being able to stand and get off the boat. We found a taxi to the hotel, and by 9:30 we were at the pool enjoying our day. I remarked that it was crazy to feel so awful and then be perfectly fine so quickly. Trey said, "One thing made you sick. We took it away. Now you're not sick." Wise words, Mr. Hickman.

And so the adventure was not what we planned, but an adventure nonetheless. The charter company only charged us for a half day. I hate that we wasted money, but I've decided to look at it as an investment: If we loved it, then we'd want to go fishing every year which would be expensive. This way we just spent the money one time.  How's that for making lemons out of lemonade?

Also, we decided that as we walked the city and the marina for the rest of our trip and vendors asked us if we wanted to go fishing or do anything else involving a boat we would just make puking noises at them. We didn't actually do it, but we had a good laugh thinking about it for the rest of the trip.

Random fact: Members of the Hickman family have hurled in both the Pacific Ocean and the Sea of Cortes. You know us -- just leaving our mark on the world.
at 12:33 PM No comments: