Just Call Me "The Rev"

Just call me "The Rev." April does, and it's hilarious. Wanna know why she calls me that?

I officiated a wedding.

Back Story...
Perhaps the hardest thing about me leaving the high school was leaving my people. In eight years there, I met my best friends. I guess growing up I always had a "best friend," but people moved in and out of Rice every couple of years, so I suppose I had migrant best friends. The fact that I've had my people for almost ten years now is a Stormy record. These guys have truly seen me at my best and my worst.

And so when I left the high school world some of my people and I made a commitment to see each other regularly no matter what. I wasn't the only one who had moved on to another school, and I guess I also wasn't the only one who felt a little scared about it. Even when life is too busy to think, we find a moment or two to laugh together. I don't know what I'd do without them.

So about a year ago, Tiffany (one of my people) met this guy Josh, who, quite honestly, seemed too good to be true. I am, as it turns out, quite skeptical of other people when it comes to them dating my friends. I like to call it "protective" and "loyal" but it's probably more a version of "Crazy Stormy" than anything else. I won't completely admit to much, but there may have been Facebook stalking and twenty questions for Tiffany every time she saw him.

Soon I realized that this guy was good. In no time at all he had me rooting for him. I think the thing that really got me is that he immediately looked for ways to take care of her. He seemed to look forward to doing something nice for Tiffany or taking care of some task just so she didn't have to do it herself. Tiffany is a very independent, strong person, and I'm not exactly sure she knew what to do with this man who kept just doing stuff. He never seemed to look for payback. He only seemed to enjoy making her happy.

She was, however, quite serious. I found out exactly how serious one Friday night via a particularly sentimental text message conversation. She asked me, via text, if I would perform the ceremony.

"I would be honored!" I replied, once again via text. (I think that's what I replied. I don't actually have the text message anymore, so I'm not totally sure, but I bet it was something like that anyway.)

Then I looked at Trey and said, "Is that okay?  Is it sacrilegious?" He didn't think so, but I decided I should check with the authorities just in case. So I called my mother.

She told me of a few other people she knows who have performed wedding ceremonies who are not preachers, and we talked about how we don't believe preachers have anymore direct line to God than normal people, and we decided it would be a perfectly lovely, non-sacrilegious thing to do. (Honestly, as is customary with my mom, she said a few words, I talked a lot, she listened, I made up my mind for myself, and she was happy enough with the fact that I can make up my mind for myself.)

And so I went about the process of ordination which began with the first of three phone calls to the county courthouse. It went something like this:

"Hi, um, yes, well, I have sort of a unique situation. I have some friends who have asked me to marry them. Wait...no...not marry them but officiate their wedding to each other. And I'm not really anything like a preacher or anything. So...you hear about people getting ordained online and stuff and I think I need to do that but I really don't want to mess this up so I was wondering if you have any recommendations for how I can do that and make sure it's perfectly legal."

The response was somewhere along the lines of "whatever."

So online I went, and ordained I became through a random free church of something not Satanic (I did check for that. I was kind of paranoid.)

Then I called the courthouse again.

"So, um, yes, well, I'm going to be officiating a wedding ceremony and I'm not really a thing, like a preacher or anything, but I just got ordained online...that sounds so weird...and now I need to know what to do to register or something at the courthouse so that I can be official with the county. I have a very lovely certificate with my credentials, so what should I do with it?"

This response was something like "Eh. Just keep it."

Fast forward to one week before the wedding. I have had nightmares about Tiffany and Josh forty years from now in their rocking chairs on their front porch and one of their grandkids walks up and says, "Granny!  I've been studying our family history and I learned that you and Pappy aren't really married!  That Stormy Hickman person wasn't even official!  It's all been a scam!"

(Yes, I also think it's hilarious to think of Tiffany and Josh as Granny and Pappy.)

So I called the courthouse again and rattled off my same line of questioning. This time the lady said of my online ordination, "You're fine to sign the marriage certificate. We don't even check that stuff." I suppose I was as reassured as I was going to get.

The wedding was a very small affair, pretty much family only, and it was on Crystal Beach.  Josh and Tiffany rented a giant, beautiful white house facing the beach so that their family could stay with them. The aisle ran from the door of the house down a lovely flight of stairs and out to the beach entrance. Tiffany is perhaps the craftiest person I know, and after this weekend she should be hiring out to decorate for weddings. It was like a wedding in a magazine. Perfect.

There were only a few of us non-blood-related people attending, and we rented the beach house across the street from the wedding house for the entire weekend. Our kids spent Saturday playing in the ocean, and we took turns offering to help and relaxing and enjoying the trip. It was such a fantastic weekend away with friends!

Here's a pic of the ceremony site earlier in the day. Notice all the kids on the beach! 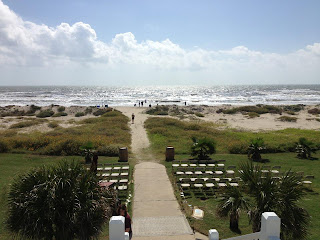 And are some pics of the view a little more along the time of the wedding: 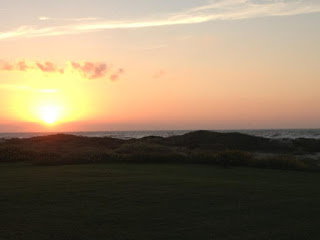 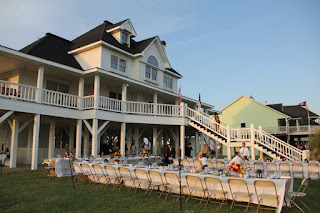 We did a little practice run-through rehearsal thing at one o'clock in the afternoon, and we laughed the whole time at what a motley crew we were -- many of us still in our pajamas or covered in sand from the beach. I believe we set a record for the least stressful wedding rehearsal ever.

Six o'clock came and everyone was ready and in their places. I think Josh was a little nervous about having to talk in front of everyone and do the whole "repeat after me" business, but he seemed cool and calm. I don't think I've ever seen Tiffany look happier. She looked so full of joy and so peaceful.

I suppose I did a decent job. I started off with lots of um's and uh's. I could hear them coming out but I couldn't make them stop - sort of like having my voice taken over by a ninth grader giving his first speech. But once I got through the first prayer I think it was smooth sailing. I had moments of nervousness leading up to the ceremony, but I knew it wasn't about me. I prayed A LOT about it over the last several weeks, so I think that probably helped, too. It should also be noted that I did not cry (during the ceremony, anyway).

Josh pulled me aside at some point to thank me. He said he is always amazed at the things Tiffany's friends do for each other, and he appreciates that she has us and that he has us now, too. I told him that she would do anything for any one of us, and probably has. I was so honored that I can't even really put it into words (and you know that doesn't happen often).

I think the thing I felt most strongly about was blessing them, asking God to provide for them and keep them close through all of the ups and downs of life. I must have done it in my head a million times, but I chose not to write it down because I wanted it to be from the Spirit and not from the script. Maybe that sounds weird, but it was important to me. I'm not one to publicly pray over someone. The Methodists do that kind of a lot, and it still feels a little odd to me even after being a Methodist myself for twelve years. I think the reason it's uncomfortable to me is that I don't want to pray blessings over someone because I was told to do it. I want to do it because I feel that the Spirit leads me to do it at that moment. Offering prayer for them at their wedding was truly the highlight of the whole shindig for me. The opportunity to publicly pray over my best friend and love of her life is something I will treasure forever.

Here's a pic of the happy couple: 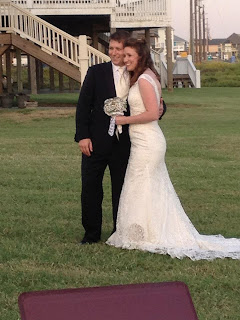 Sidenote: Tiffany and Josh, I truly almost prayed for "lots and lots of babies." I hope I implied it well enough. Know that the silent prayers include that. Trey would like to request a girl so he can spoil her since he didn't get one. :)
at 8:48 PM No comments: