One week ago today, Brazos County Constable Brian Bachmann was killed in the line of duty. An innocent bystander also lost his life, and several other people were injured. There aren't adjectives enough to describe this terrible thing.

It was an awful week. It seems like I cried constantly, and I felt silly because he had a family and close friends who deserved to cry. Children lost their dad, a wife lost her husband, police officers lost a member of their close family. My heart was -- and still is -- broken about the whole thing. Our whole community is shaken. It's awfulness overwhelms me still.

During the funeral service on Saturday, however, I felt the sun come out again.

One of the speakers mentioned that Brian was an ordinary guy.

I knew him as the Constable and a dad of one of our students. He often worked "Daddy Patrol" in the mornings, directing traffic and making sure the kids safely crossed through the parking lot. He was also instrumental in our very first major school fundraiser, volunteering to do whatever we needed him to.

I was in a PTO meeting recently when one mom said, "We just need to decide what we want the Constable to do and tell him. He's already said he'll take care of whatever we need and you know he will do anything we ask."

Another PTO mom posted on her facebook after his death: "When I would tell Brian Bachmann what I needed help with at the school our children attended, his answer was always the same. Either 'I'll take care of that,' or, 'I've got that.' And his next words were always exactly the same as well, 'What else can I do to help?' No matter how busy he was, he always had time."

I saw him often because we also attend the same church, but the image that will forever be burned into my brain is when I stopped him before school one day to tell him how sweet and precious his daughter is. His smile then could have lit up the whole school. I will forever remember the love he had for her in that smile.


During his service, many others mentioned things they would remember him for. A man noted that Brian had recently given his wife $50 for gas. He spent the morning of his last day following a driver to the tax office to have his registration renewed so that the driver wouldn't get another ticket on the way. Story after story was told about the little things he did all the time. If an opportunity to help someone appeared, he was the kind of guy who seized it. Every time.


On the day he died, several area churches held prayer services that night. My family attended the one at our church, and it was full with people stunned into shock. Many law enforcement officers and first responders attended, and we prayed over them for their safety and comfort. As I watched the crowd, I noticed how many kids there were in the church.

Teenagers almost outnumbered law enforcement officers. Our youth group was there in full force, sitting together and comforting each other. When we walked in we first saw a row of boys in their purple -- our high school's purple -- and it seemed they had just come from or were headed to practice.


I was so taken by their presence. The shooting had been less than seven hours before, and there they were -- loads and loads of them -- supporting their friend, the Constable's son, simply by showing up.


Could they possibly be ordinary?


During the week, I had the privilege of visiting the family, and the sheer number of people there just taking care of things was astonishing. There was an officer outside the house. Moms and dads inside making sure that school clothes had been purchased, that school schedules had been picked up, that the kids could get to practices or whatever they needed to in order to feel a little normal. People were crawling the walls just helping.


On Saturday as I crossed the street from my parking place to Reed Area to attend the service, I stopped in my tracks. Flags were everywhere. They seemed to sprout from the concrete in every direction. As I approached, I began to sob. Each flag was held by a member of the Patriot Guard Riders, and they stood in silence honoring a fallen officer and respecting the mourners who entered. A teacher from my school was among them. Others offered bottles of water to people as they entered the building. 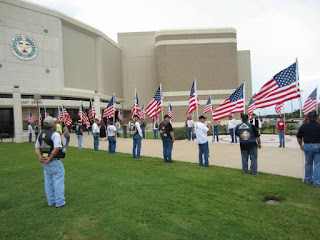 
The service was filled with law enforcement officers and first responders from near and far. I sat next to a sheriff's deputy from Fort Hood County. I saw police cars from Corsicana, Magnolia, The Woodlands, Louisiana, and countless other places. Some of these people likely knew Brian, but I'm certain that many of them did not. They simply know what it's like to risk your life to keep people safe, and they know what it's like to feel loss. And they showed up.


They were regular men and women.


As the funeral procession advanced from Reed Area to the funeral home, the people of our city lined the streets to honor one of our own who gave his life in trying to keep us safe. The fire department suspended an American flag across the road. It was such a demonstration of a community coming together to lift each other up and just love on each other. I still look at the photos in awe. 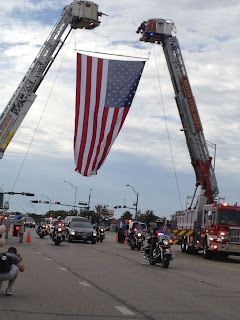 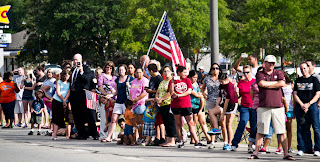 Photos of ordinary people who wanted to support each other.


At the conclusion of the service, as I left the building with thousands of others, the air filled with the unique mix of rain and sunshine. The sun's rays beamed through fat, replenishing drops of much needed rain. It was so strangely appropriate. A scripture from the service echoed through my mind as I relished the rain on the way to my car.


Micah 6: 6-8:
With what shall I come before the Lord, and bow myself before God on high? Shall I come before him with burnt offerings, with calves a year old? Will the Lord be pleased with  thousands of rams, with ten thousand rivers of oil? Shall I give my firstborn for my transgression, the fruit of my body for the sin of my soul? He has told you, O man, what is good; and what does the Lord require of you but to do justice, and to love kindness, and to walk humbly with your God?


I thought of all the people, all of the thousands of people in our community who were willing to use whatever gifts they had to step in and to help, support, love, honor, and display kindness to one another during this horrible, horrible week.

In that moment I realized that ordinary people all around me were doing extraordinary things. I didn't know all of them, but they were my people, and we would always, always take care of each other. I believed again in that moment that God made people to be inherently good and kind. I wanted to be that person, like Brian, who looks for places to help and just does it -- just shows up and says, "I'm on it." I looked around me and saw so many people already doing that. So many people.

Oh, to be more ordinary!

A poem by Marianne Williamson was shared at the service that I have not heard before but will hold in my heart for a long time. It seems appropriate to close with it here.

It is our light, not our darkness, that most frightens us.
We ask ourselves, Who am I to be brilliant,
gorgeous, handsome, talented and fabulous?

Actually, who are you not to be?
You are a child of God.

Your playing small does not serve the world.
There is nothing enlightened about shrinking
so that other people won't feel insecure around you.
We are all meant to shine, as children do.

We were born to make manifest the glory of God within us.
It is not just in some; it is in everyone.

And, as we let our own light shine, we consciously give
other people permission to do the same.
As we are liberated from our fear,
our presence automatically liberates others.