It's no secret that I've begun this weird crafty streak (see my previous blog post). One of my good friends, Tiffany, laughs every time I start talking about a new project because for years she's had to create anything that needed to be created in my life. I have a little fear that I'm turning into that person who gives home made gifts to everyone that I think are awesome but everyone else thinks are really ugly, yet I continue to craft. If I give you something ugly, just look excited and then put it in your closet at home. I'll probably never know, and I'll certainly continue to enjoy the oblivion.

This is something I made for my mom for Christmas. It has all of our names on it (with one empty space for Wendy's July baby). I wish I had a better picture that included the frame. 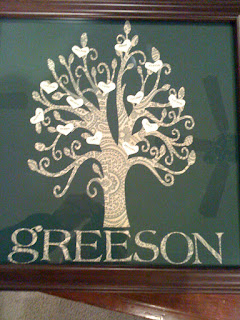 This is wreath I made for the newlywedded Barretts. My sweet new niece seemed excited when she saw it, and whether it's in the closet or not is really of no concern to me because I had a good time making it. 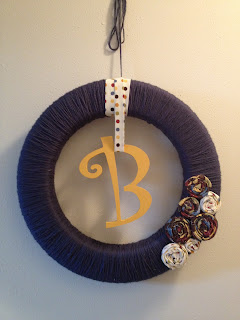 Then, I found some shutters at the Habitat for Humanity Restore that I really wanted to make something with. The only problem was that I had no idea what to use them for, and I'm just cheap enough to NOT buy something unless I know its exact purpose. I visited the store several times, admired the shutters, and left without them.

One day as the boys came in from outside I heard the familiar crash of the ugly baby gate we keep leaning against the doorway so that the dog doesn't get out. I hate that gate, but not as much as I hate chasing the dog down the street because she slipped through while the boys are coming in the garage door. I've done this many times - in my pajamas, in bare feet, in the car - all the while yelling at the boys that "THEY KNEW THEY HAD TO SET THE GATE JUST RIGHT OR THE DOG WOULD GET OUT!"

I had been blessed with a shutter plan, and when I arrived at the Habitat Store to make my purchase I was excited to learn that the sets were only six bucks each - twelve dollars for the whole haul. 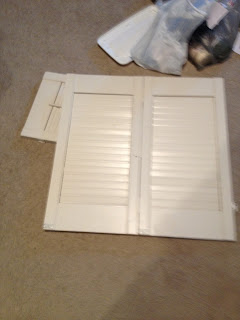 I went back and forth about how to make this fantastic dog gate that existed only in my head. I thought about using a hinge to attach it to the door frame and a hook and eye for the opposite side, but I do my best to keep holes out of the wall because we will someday sell this house. So I decided to make it free-standing. A trip Lowes found these - they are actually caps for fancy fences, but they would work perfectly for the feet of my dog gate (awesome shadow in the background, huh?). 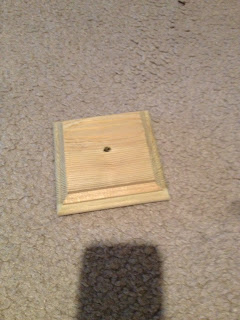 I went to work attaching the feet, and I learned that Keaton is a master measurer and hole-marker. I did the first one, and he marked the other three perfectly. Once I had the feet on, I realized I would have to re-do the hinges to make it fold the way I wanted, so Keaton and I removed and re-installed the existing hinges to the way we wanted.

Then I spray painted. Let me tell you, spray painting shutters is a pain. You have to spray them open and spray them closed and spray them partially open and touch up and blah blah blah. It took two cans of paint and a long time, but finally they were green. (FYI - I don't think it would have been faster or less meticulous if I had painted with a brush.) 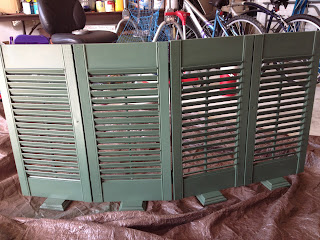 To make them a little more interesting, I added some birds and some curly-thingys (that's a technical term).  I must say that I'm pretty happy with the way they turned out. Our living room went from this: 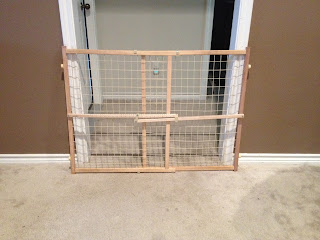 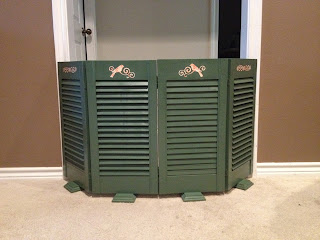 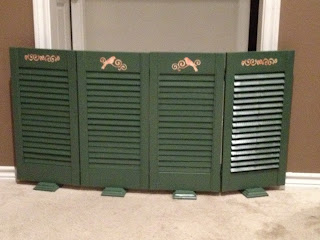 The only potential problem I see with this arrangement is that Roxie could easily jump over the gate if she took a mind. I'm certain, however, that she doesn't know this. As long as I keep the secret, we'll be fine.

I have one more project that I've already bought the stuff for, and then I think it will be time to break out the ol' sewing machine. Once I figure out how to work it, that is.
at 5:05 PM 2 comments: