My friend and boss recommended this book to me several times, but I never really took interest. Then, when it was at our church's garage sale for twenty five cents I decided I would give it a shot. The story is about a family with two very different daughters, a kind father, and a mysteriously distant mother. The father dies early in the book and leaves the sisters with the task of getting to know their mother so that they can understand her better and have a relationship with her. One moment at a time, the mother reveals her younger years to her children through fairy tales about a princess in Russia. The storyline is predictable but enjoyable. My only real complaint is that the ending was disappointing. It took the book from an interesting piece of historical fiction to a book you'd buy at a garage sale for a quarter.

I started book six of the year, The Red Tent by Anita Diamont. It is Christian fiction with a story centered around women's monthly visits to the red tent. It took me about two chapters to realize I just couldn't read a story about Bible women centered around their time of the month.  I started a John Grisham novel instead (also from the church garage sale, I might add).
at 5:45 PM No comments:

First, I am spoiled. This simply means that my family does a very good job of making me feel loved all the time, and on Valentines Day it's even better. Every year, Trey gets up extra early and makes us breakfast. This year it was heart shaped French toast and bacon. When I woke Keaton up, I asked him if he could smell the bacon. Before he even opened his eyes, he said, "No, I small Valentines Day." 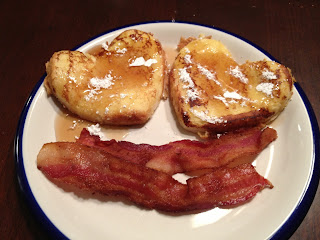 My boys also surprised me with a gift this morning. Trey said when he and Tucker were in the store he asked if Tucker had a girl he wanted to buy a Valentine for. "Yes," Tucker said, "Mom."

The sweetest thing ever, right?  The boys spent their own money on flowers and chocolates for their dear old mom. 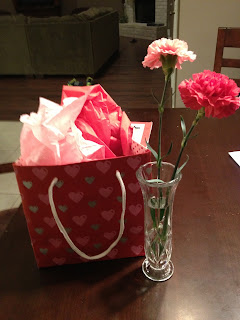 Then, I received my annual Valentines tulips. We had tulips in our wedding, so when Trey sends me flowers that's what I get. He sends them from the same place every year, and they are always beautiful and last a long time. Only this year there was a problem. It looked like the flowers had frozen or something. We had a good laugh about them at work.  I hated to call Trey and tell him that the flowers were a bust, but I wanted him to get his money back! It truly is the thought that counts, and he remembered. I hate to expect that I'll get flowers on Valentines Day, but I would probably be disappointed if I didn't them, so he did good! 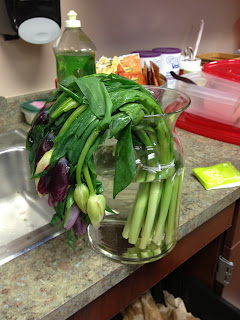 Finally, after Keaton went to bed he called me into his room. "Open my binder and look in the front pocket. You'll find something," he said. It was a sweet Valentine card he made for me today. 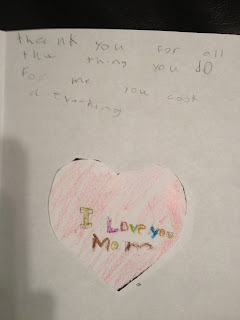 So let it be known that in this Hickman family, we have boys who are very good at making their wife and mother feel loved and special and appreciated. I'm grateful every day of the example Trey sets for my kids to love constantly and never keep it a secret. They'll be good husbands and dads some day because of him.

Book #5: Seeing Gray in a World of Black and White by Adam Hamilton

This is a long and risky post, but I hope you'll read it. I especially hope you'll read it if you've ever made fun of, yelled at, or wanted to yell at someone who believes differently than you on important political issues of our day. If you've ever posted something on Facebook or forwarded an email that ridiculed someone because you thinks it's ridiculous that they believe the way they do (liberal or conservative), you should read this post and this book.

Our Sunday school class decided to do a series of lessons Seeing Gray, which is what made me pick it up in the first place. I'm working on reading the New Testament, Psalms, and Proverbs over a year (I have 164 days left), and one of my goals this year is to read more faith-based books to grow and stretch my own faith. This book certainly accomplished that.

The premise of the book is that the world is a really gray place. Many people believe that there are only two sides to each controversial issue that faces our society today, but in actuality there is a good bit of gray and a good number of people whose understanding of Christ and Christianity make them very comfortable there.

It doesn't make them popular, though.

Early in the book, Hamilton states, "My own approach to controversial issues...is that any issue about which thinking Christians disagree likely has important truth on each side of the debate." (I would give a citation, but I'd have to look up how to cite my Kindle and I just don't want to.)

I really, really like this idea as I believe (and often say) that I live in gray. Primarily I talk about this when it comes to disciplining/helping students. A black and white approach does very little to change behavior (particularly negative behavior), so I feel like I have to be comfortable without absolutes. If you know me at all, you know that I was raised in an exceedingly conservative church (that I love), and you would also know that as an adult I like to think I'm very comfortable with questioning and struggling with just about anything. I have no trouble entertaining the possibility that I might be wrong about something or that my perspective is limited. I understand that some people see this as wishy-washy or cowardly, but I don't. In this way, I really appreciate the concept of this book.

The first section of the book deals with the ideas of liberals and conservatives. The author notes that very few people are truly either. No matter who you are, someone is likely more conservative than you; likewise, no matter how liberal you are someone is likely more liberal. He notes that on different issues we may find ourselves at different points of the liberal-conservative spectrum, and he calls for a movement in our churches to make that okay -- for people to be comfortable with the fact that they may see some issues as gray areas.

Section two primarily discusses the Bible and the opposing viewpoints of it being either the literal word of God or a message from God presented through man, including the humanity of its authors and the traditions and norms of the times in which it was written. In my upbringing, I believed that the Bible was the literal, infallible word of God. Then I took a lit class in college about the Bible, and we learned about its authors and the historical context behind it. (This is also when I learned that the Bible has some extra books that got cut before the King James Version. I was very troubled by this. Who knew?) Many of our conversations today about controversial issues truly rest in the belief system one holds about the Bible. The section has chapters about evolution, whether or not people of other religions will go to heaven, if hell exists, and why bad things happen. I loved the explanations of how science can be a part of faith instead of working against it. More people need to talk about that.

I really, really loved the chapter titled "Where is God When Bad Things Happen?" In it, the author asserts that God doesn't cause bad things to happen to teach us lessons or make us better people, but that the world and its humans are flawed, and accidents happen. God can certainly work through tragedy, but our loving God does not today single out people to harm in order to prove a point. I like that idea a whole lot.

Not surprisingly, I had the most difficulty with the section titled "Politics and Ethics in the Center." Chapters include the topics of abortion, homosexuality, war, and presidential elections.

I have a very strong feeling about abortion which I believe was truly cemented when I miscarried many years ago. I understand that other people disagree with my pro life view, but I'm not going to change my mind. I am very conservative on that issue, and I found it difficult to read both sides of the issue without wanting to argue with the book. However, I do believe that we should love and nurture those people who have been impacted by abortion and that God's grace is sufficient. I also understand that smart, educated people disagree with me and feel as strongly about their views as I do of mine. We disagree. I can be okay with that.

The homosexuality chapter was very intriguing to me because as an adult my viewpoint on this issue has developed from that of my youth. I learned as a child that homosexuality is wrong. Now I know and love many people who are gay, and I truly believe that they were born to be so. It is difficult for me to believe that these good and kind people were created with some sort of error, and so my perspective has really challenged my faith and, in my opinion, caused it to grow. I know that the more conservative of you will think I've gone all crazy liberal, and the more liberal of you will think I've committed some sort of crime for even discussing the issue as an issue. That's okay. I'm on my faith journey and you're on yours. I love you anyway, and you probably still love me, too.

The chapters on war and presidential elections were, well, a little annoying to me. I felt like the author tried to present both the far left and far right of issues in every other chapter, but in these he just presented his view and explained why he's right. I disagreed with him in many areas and did not feel "the other side" of the issues was well represented.

The bottom line of the book, and something I agree with wholeheartedly, is that Jesus is our Savior and the guide for how we should live our lives. I appreciated the author's perspective on what is non-negotiable in Christianity and what is open to interpretation and discussion and guidance by the Holy Spirit. Overall, this book challenged and stretched my faith, and I'm glad I read it.

Hamilton says of the opposing viewpoints among Christians:
"The truth is that all of the branches in this tree called Christianity are a bit defective. But each adds to the beauty of the whole. What a tragedy if we were to cut off all but one of the limbs. But what riches are to be found if we can humbly listen and learn from one another, appreciating our differences, while together seeking to follow Jesus Christ."

I know people who do not believe in God but instead believe in what they see as facts and science and common sense. I struggle with this because I love and respect these people, and sometimes I want to be mad at them for violently disagreeing with my faith, or even making fun of it indirectly. This book seeks to reconcile faith, science, common sense, and differing perspectives. I hope some of these friends of mine will, with open mind, read this book and know that Christians are not all Jerry Falwell. And maybe find a little faith along the way.
at 10:38 PM No comments: