It's been two weeks since my last update. We've entered a new realm of parenthood in the last two weeks - we have both boys playing sports. Tucker has started flag football season with games on Tuesday and Thursday nights at 6:00 and practices on Saturdays. This coming Tuesday is his first game, but he's been practicing on his regular schedule for two weeks. I've found I can get lots of Saturday afternoon grading done at football practice!

Keaton has finally delved into the world of childhood soccer, and it's wonderful! He's been waiting for half of his life (about two years) to put that soccer uniform on, and I think it's everything he ever dreamed of. 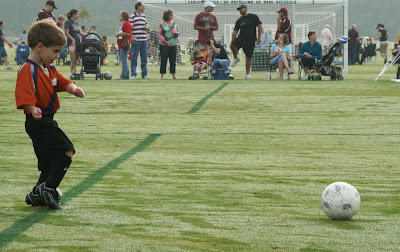 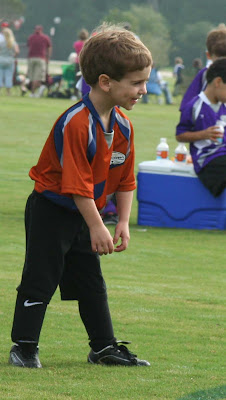 You see, when Keaton plays soccer, people yell and clap and cheer for him and the rest of his team. He adores the glory of it all, and he can't help but to turn to the crowd of his adoring fans and share a smile, even during the middle of the game. He runs and runs, and waves and waves, but he doesn't actually kick the ball. It doesn't matter, though, as long as the people will cheer.

As an added bonus, he was amazed and excited to learn that at half time he gets to eat oranges. And sometimes there's Gatorade. What more could a kid ask for? 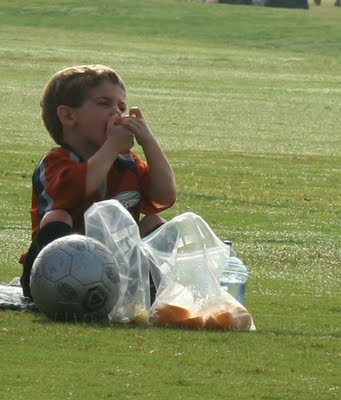 While Tucker has always been very serious and competitive in everything, Keaton continues to find ways to make every single undertaking a world a fun, and it makes me happy to watch! Somehow it seems calmer around here even though we're busy. We're spending lots of time together without watching tv or being on the computer, and it's good to be together.
Cutting down on the tv is probably a good idea, too, because tonight as we were watching The Amazing Race the teams had to eat super-spicy wasabi bombs. After one girl finished her challenge, Trey said to me, completely under his breath, "She's going to be crapping fire."
To which Keaton replied emphatically, "Oh yeah! She's going to be crapping fire! Whew! Fire! That's right. Crapping fire!"
Yeah, I think we might need to cut down on the tv.
at 10:02 PM 1 comment:

Yep, I have a story from each boy this weekend.

First, Keaton. Yesterday, Keaton cut his hair. Not just a little trim, either, but a serious hair cut. He lost inches off the top, and the front of his hair was barely half an inch long. This, my baby with his handsome flowing locks, now all gone. Well, gone in chunks, anyway, because he's not particularly good at cutting hair.

I wasn't home when this happened. The story goes that Keaton was a little too quiet, so Trey went to check on him in our bathroom and found him weilding the scissors. The damage had already been done, however. Trey explained to him that he looked ridiculous and needed to go to his room.

Keaton fell apart in dispair. He sobbed, wailed in physical pain, and almost hyperventilated. He refused to look in the mirror at his hair. This went on for at least half an hour, and that's when I called. Trey explained the situation and his facisnation with how upset Keaton was about his beutiful hair being chopped to pieces.

Trey put Keaton on the phone, and what he said to me was incomprehensible. He was so broken about his hair. I've never seen or heard him so upset.

Yes, it was quite funny.

I came home, took him to Classic Cuts, and got the mess cleaned up a little. It doesn't look ridiculous, but it doesn't look like Keaton's flowing locks either. Maybe in a few weeks.

Tucker's fantasy football team is doing very well this week so far. He scored 19 points in the Thursday night with Sanantonio Holmes, and today things just got better. Most of his players had noon games, so he was going crazy. He had the stat tracker up on the computer and the Texans on the tv. He was yelling at the tv and the computer and shouting updated scores at us every thirty seconds or so. It was football season as it's best.

At some point he said to me, "Mom, I can smack talk my opponent on yahoo!"

I had seen the instant message-type link that allowed you to communicate with your opponent, but I hoped Tucker wouldn't find it (yeah, right). I explained that he really didn't need to be smack talking people he didn't know on the internet and let it go.

A little later I took a seventeen minute nap. After seventeen minutes Tucker yelled for me to wake up and Keaton climbed on top of me and kicked me in the face, so I gave up and woke up. As I walked past the computer I saw this in the "smack talk" box: "I"AM WINNING 94-36"

My first thought was that some internet stranger is about to start cussing out my six year old. I couldn't figure out how to delete the smack talk, so I took the only action a mother could take. I smack talked as well. It said this:

"FYI -- the superjacks team belongs to a six year old. I had no idea he would 'smack talk' while I was taking a nap. Yes, he's a freak about football. This is his mother."

And there you have it. Tucker saw that I posted, and I think he was a little annoyed by me, but thankfully he's too young to be humiliated.

But there's a lesson to be learned here, and I hope he learned it. If it's for his own good, I will humiliate him. It's my job as his mother, and while I may not like it, I'm not afraid to do it. So hoiw's that for smack talk?

I wonder how the guy feels that now knows he's getting killed by a six year old whose mother won't let him smack talk?
at 9:01 PM 1 comment:

Today is Labor Day, and while I didn't mind too much that I had to work, it turned out to be one of those days that I just wanted to throw my hands up in the air and start over.

I guess it started yesterday when every time I opened my mouth I ended up thinking "should I have said that?" It continued into today, where I just kept almost doing things right. You know as well as I do that almost just ain't gonna cut it. I'd rather totally screw up than get things almost right.

With a sigh of relief, I left school around 3:05 to attend my annual exam at the gynecologist. Turns out it's been about 18 months since I've been, and when I started getting threatening notes from the pharmacist about how he's not going to refill any more pills until I visit the doc, I decided to make an appointment. Today was the big day.

As I sat in the waiting room reading my book, an extended family came in, including two men, two women (one very pregnant), and two kids. One of the kids immediately began scraping a toy against the wall of the waiting room making the most awful sound. It was all I could do not to walk over and yank the toy from the kid's hands.

His parents (I guess they were his parents) didn't notice because they were having this conversation as loud as possible:

Then everyone roared with laughter.

Roaring laughter again accompanied various profanities and the annoying SSCCCCRRRAAAPPPEE of the toy against the wall.

Here's what I was thinking: "PLEASE let me get back there to the doctor. PLEASE! I don't know how long I can take this without throwing things at them. I might kill them. No. I can't kill anybody. But I could hurt them. And I could make a scene, and then the nurses would come out, and they would think I was crazy and go ahead and call me out of the waiting room because they don't want the crazy lady to scare people. I could hurt them with my book. Yeah. Books are always the answer!"

I don't think I've ever looked so forward to seeing the gynecologist in my life.

Finally, just before I "accidentally" hurled Lord of the Flies across the room, they called my name. We did the usual weight and blood pressure thing (mine was higher than usual. wonder why?), and then off to the room we went. On the way, the nurse informed me that Dr. Davis had a student with him today.

I've had two kids which involved lots of people in the room. After a few hours of labor, modesty just seems a bit overrated. So bring on the students. I really don't think I'm interesting enough to be the one thing they remember from their day shadowing Dr. Davis. Mainly because I've seen the waiting room.

So I psych myself up for the impending exam, get naked, put on the gown open in the front, cover myself with the sheet, and sit.

I was so grateful to be sitting semi-naked in a cold room all alone that I didn't even mind waiting. I could have sat there all day. It actually occurred to me to get my book back out and lay down on the bed until the doctor came in. Escape from the day a little, you know.

But then he did come in. He stuck his head in the door to say, "Hey Stormy! I've got to go deliver a baby. I'm sorry."

Humph. Of course. I should have known this would happen. I quickly reminded myself that he likely ditched some appointments throughout my two childbirth sessions, and smiled and told him no big deal. He asked when I was available again, and I mentally listed the several meetings I have scheduled this week. Finally I offered to go to the front desk and schedule something that I could later cancel after I checked my planner. Poor Dr. Davis was very apologetic, and I'm afraid I didn't look "carefree" enough about listening to Bret Michaels and family and then getting naked and mentally prepared to be medically violated all for nothing.

I really did (and do) understand. It was just the icing on my cake of day.

And now, after Fish Daddy's for dinner (to go and paid for with a gift certificate) and a rather large glass of wine, I am officially calling this day over.

As Trey was helping me plan my outfit for 80s day at school tomorrow, Keaton made suggestions about what I should wear and how I should wear it. Then he took a piece of fabric we were thinking of using as a belt, and had me tie it around him to be his belt. It looked more like a sarong.

Next, he got a hot dog lunchable out of the refrigerator, tossed it at me, and barked, "Heat that up for me." After I recovered from my shock, I tossed it right back to him and said, "No."

So he picked it up, handed it to me politely and said, "May you please heat up my lunchable, Mommy?"

Then he began joyously shouting something about a "pic-a-nick" and making dozens of trips from the pantry to my room carrying things like poptarts, oreos, and gummies.

"Something we'll have to clean up later, I'm sure," I replied.

And so goes another quiet evening at the Hickman house.
at 7:48 PM No comments: