Grad school is finished. I have an awesome new job as an Academic Coordinator A.K.A. Assistant Principal. Professionally, things have been going my way.

On Monday, Keaton will be six years old. I can't believe it. What did we do in the 2 1/2 years we only had one child?  What did we do our whole lives before that without Keaton?

A few reasons why Keaton is awesome.

1) He takes great care of himself, even at almost six years old. If Keaton needs a drink of water, he gets some water. If he's hungry, he grabs a snack (usually a peach or some green bell pepper slices or a honey bun). When it's time to clean up, he makes a game out of it and gets it done (most of the time).

2) For his birthday cupcakes, we went to the store, and he chose the cake mix, the frosting, and some gold decorative frosting to write on the cupcakes. Tonight, we made the cupcakes together (he did most of the work), and then he carefully instructed me on how red to make the frosting so that it would be perfect. Then, he gave me specific instructions on how to frost the cupcakes -- the flower-looking ones are for the girls. As a final touch, he wrote the first letter of each person's name on a cupcake so that all of the partygoers can have special cupcakes just for them. You can't read some of the letters, but who cares? 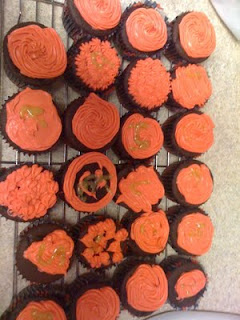 3) He randomly assembles things and makes up new games almost constantly. Tonight he was jumping from the "diving board" of a pillow in my room into a pile of blankets. Yesterday he took an old backpack and filled with first aid supplies so that it would be an "emergency backpack" he could use to help people who are hurt. Tonight when Tucker complained of a tummy ache (because he didn't want to brush his teeth), Keaton came running with the emergency backpack and told me I needed to take Tucker's temperature.

Yesterday he made this contraption, which he said was good "for moving stuff." After I took this picture, he connected the end he is holding to his Tonka truck, and then the whole thing was on wheels and could move "really heavy stuff." 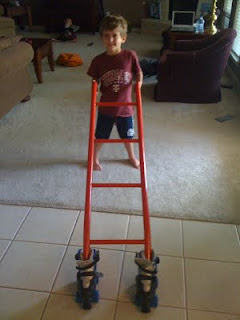 4) He has a vivid imagination, even in his dreams. Every once in a while he'll crawl in bed with us, and usually he's talking so much that I have to wake up and listen carefully to whatever crazy thing he's talking about. I'm also convinced he sleepwalks because many times he comes into our room shouting about something that has apparently just happened. At 2:30 this morning he appeared at the foot of our bed screaming, "I am getting so tired of this!"  Hmmm...if we only knew what it was he was tired of.

5) I could go on forever, but I will finally add that for Keaton anything is possible. Even changing his name. He told Trey tonight, "You can start calling me James if you want. It is my name, you know." Then he talked about how at Greens Prairie Elementary he might just tell everyone to call him James. It is his name, you know.

My sweet Keaton is going to be six, and it's hard to be too sad about him growing up because I am so excited about all of the things he's going to do in the near and far future.