His name is George.

I think it started after Christmas. Actually, it was probably before Christmas because he probably asked for it for Christmas and Santa didn't deliver. Either way. It's been a while.

But today we got the hamster.

Keaton is like the animal whisperer. He loves animals and they tend to love him back. He's kind of a people whisperer, too, and he sings like he's on Broadway when he's in the shower, but those are not relevant to this post.

Keaton decided he wanted a hamster.

Trey and I responded as a team. Nope. No way. Absolutely not. This is a no rat zone. Rodent free home. It will smell and then it will die and then we'll have a dead smelly hamster in our house and a distraught Keaton. No hamster.

But Keaton was not deterred. He continued to ask. All. The. Time.

First, there was the debate.

Trey and I were watching tv in our room, and Keaton came in, set up a tv tray, stacked some papers on it (his "notes"), and announced, "Welcome to the debate about Keaton's hamster. I'll begin with opening remarks. First, a hamster will teach me responsibility. I will have to take care of it and help it if it gets sick. I will have to give it food and water. Second, hamsters are good pets. They stay in their cages, but you can get them out to play when you want. Third, I have saved up enough allowance to buy the hamster and everything it needs. Are there any responses to this debate?"

It was pretty awesome. We laughed a lot. But then we said nope. No way. Absolutely not. This is a no rat zone. Rodent free home. It will smell and then it will die and then we'll have a dead smelly hamster in our house and a distraught Keaton. No hamster.

Again he was not deterred. He kept asking. We would set deadlines for him. "If you ask about that hamster one more time today, you are going to bed early." He always, always stopped asking then. He waited until the next day, and then started all over. We later realized it was a strategic move so as to not bug us too much while still asking over and over and over again.

Then he talked to his super nice teacher who happened to have a hamster cage she would like to give away. "She really wants me to have it," he would say, "and it would save even more money because I wouldn't have to buy a cage."

Everywhere we went - school, church, to see family - people would say, "I heard Keaton is getting a hamster."

That dumb hamster was taking over.

Still, we resisted. At this point we began just avoiding. Keaton would ask me on the way to gymnastics and I would tell him we needed to have a meeting about it with Dad. He would ask Trey, and Trey would deflect just like I did. We got very, very good at avoiding.  When my dad offered to take the boys on a ski trip on spring break, that bought three whole weeks of "Who will take care of it while you're skiing? We have to wait to talk about after the ski trip."

The day he returned...the very day...I found him on the computer researching the types of hamsters and their costs. He had a list of which ones he liked the best. He asked each person in our family and some of the neighbors which was the cutest. Then he started asking again for permission to buy it, explaining in detail each thing he would get from his teacher, each thing he would purchase, and its cost.

Worried that he wouldn't have the money for tax, he asked if he could do extra chores. Then he asked for more extra chores so he could have money to buy Tucker a hamster, too. Now the hamster was multiplying. I saw hamster babies all over my house, being eaten by the dog. Keaton is truly so sweet for wanting to include Tucker in his adventure, but this was getting out of control.

Let it be known that Keaton James Hickman is one stubborn bull-headed determined child.

Finally, last Friday night, Keaton asked one more time. "Can we have the meeting about my hamster now?"

And Trey said, "Keaton, your persistence has paid off. You've answered all of our questions, done your research, made a plan. I'm impressed. So yes, you can have a hamster."

The excitement on his face was priceless.

We didn't get the cage until Monday and were busy Monday and Tuesday nights, so even after Keaton had the answer he wanted he had to patiently wait. On Saturday I took him to browse hamsters so he could decide which one he wanted and could afford. He never complained about those four days of waiting, but he talked non-stop about it!

Tonight I picked him up from choir, and we went to the pet store. I told a store employee that we needed a hamster, and he asked me what kind. I told him the kid was the one in the know. For the next twenty minutes Keaton talked to the guy like a grown up. He explained that he liked the teddy bear hamsters but that he really wants one that he can hold and will play a lot. An active hamster. He asked the man's advice.  The store employee suggested a short haired hamster rather than the teddy bear, and Keaton listened intently and determined to meet one of the short hair hamsters. He held it very sweetly and decided it was the one. He said things like, "What type of food do you recommend?" and "Can you show me where to find that?" I just stood back and watched him work his charm on the store employee.

As we checked out with all of our hamster gear, he beamed.

Once we got home, Keaton wanted to put the hamster in his rolling ball thing while we got the cage ready. When he opened the box, that hamster started hissing and going nuts. "This is it," I thought, "I'm about to have a rabid hamster on the loose. Trey better hurry up and get home because I am NOT hamster wrangling tonight!"

Keaton then calmly explained that he must be scared and need to rest in his cage for a while to get used to his new home and new family. He probably missed the pet store, you know? We got the cage ready quickly and loaded George in.

Wouldn't you know it? Twenty minutes later and George and Keaton are best friends. Keaton taught him how to crawl through his tunnel ("He didn't want to jump in at first, but I told him he would be okay, and then he just jumped. I think he really likes it"), shared an apple with him ("Mom, I cut his piece off and gave it to him. I didn't share it with him!"), and they laughed (if hamsters laugh) while George rolled around in his ball. 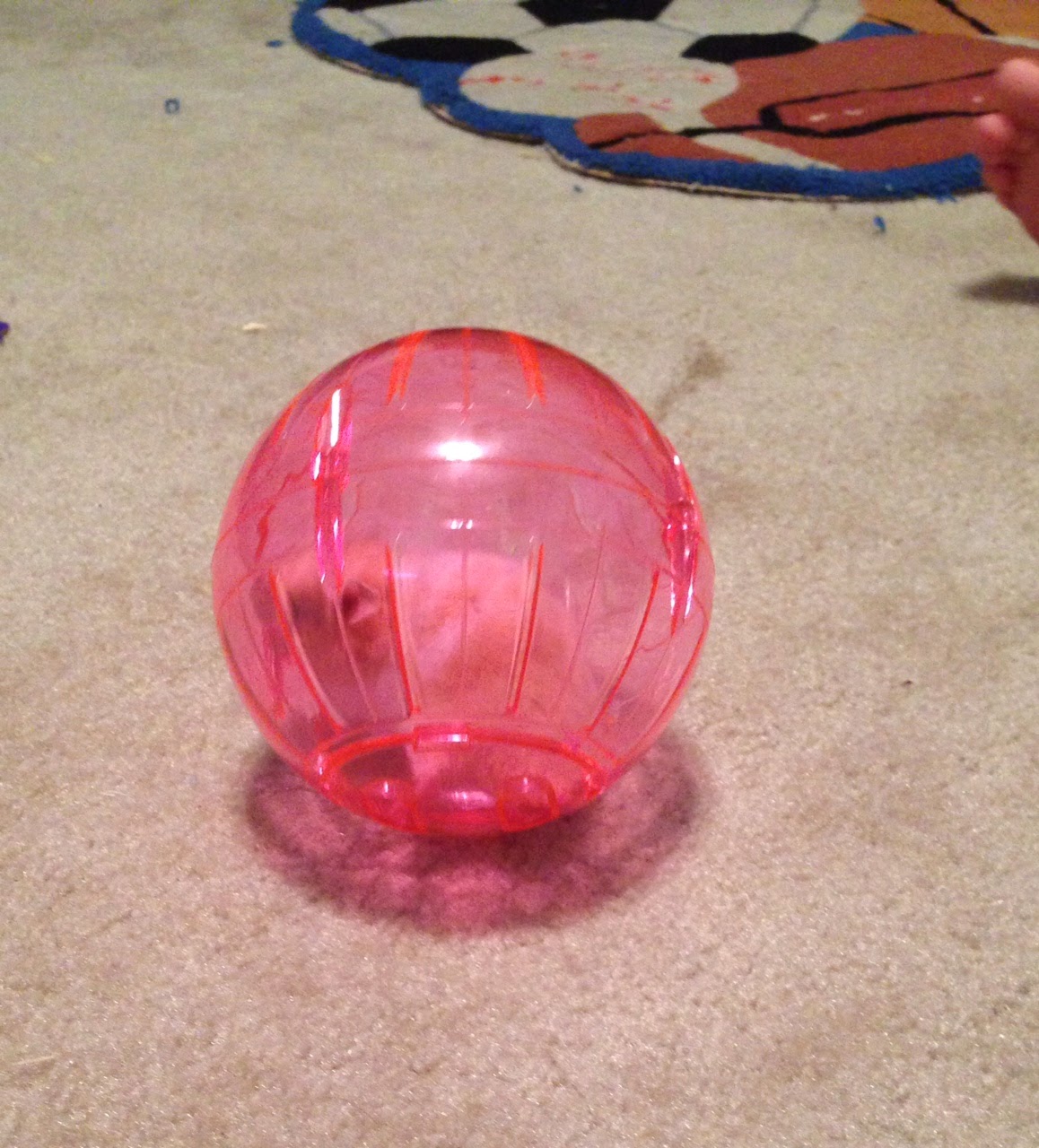 That hamster really is cute. He's even cuter with this happy kid! Someone remind me of that when there's a dead smelly hamster in my house. 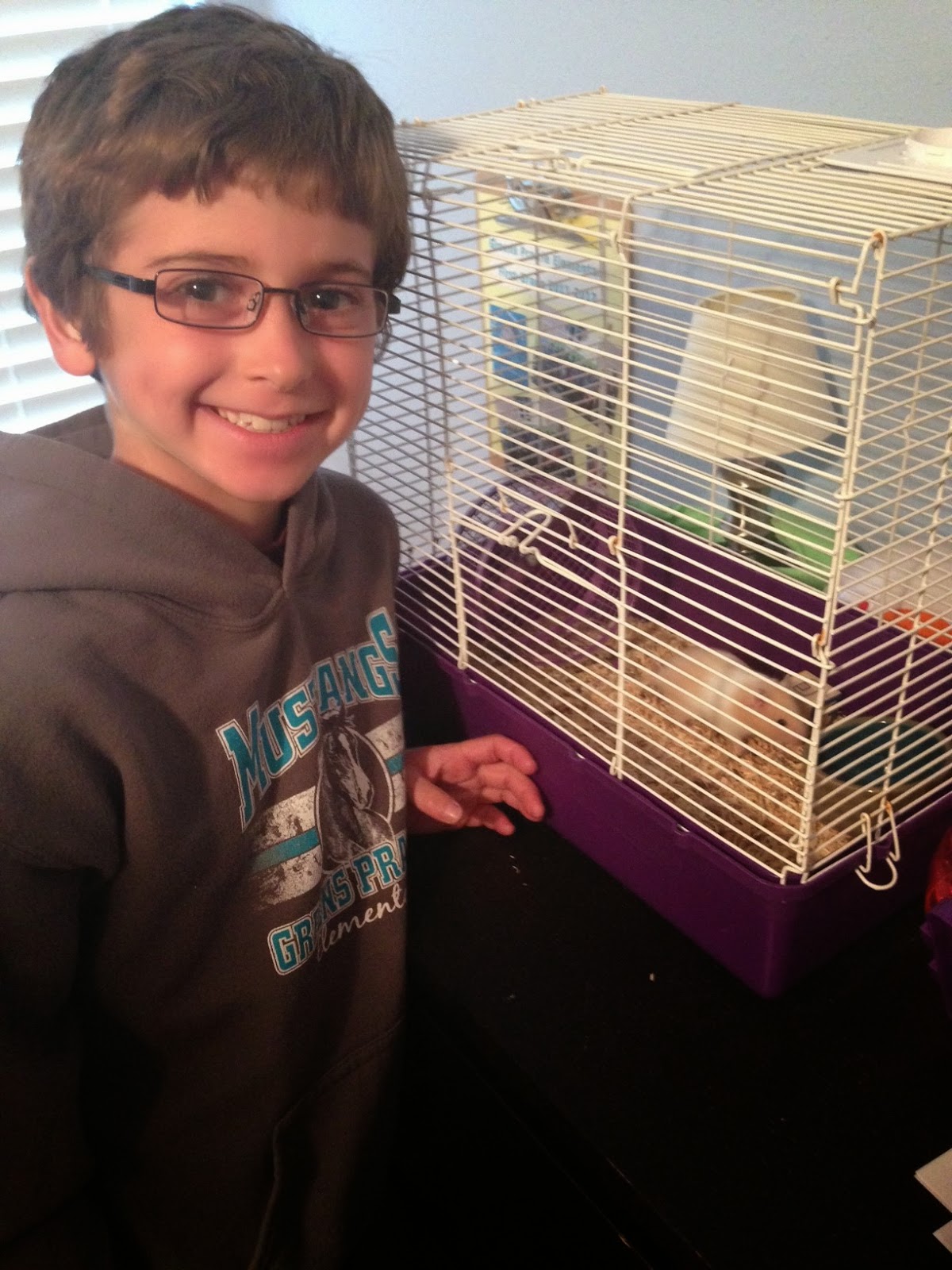 Book #6: This Dark Road to Mercy by Wiley Cash

I finished this some time ago. It's a great book to get lost in and not want to put down. Sometimes I have a hard time finding books like that.

The story centers around a twelve year old girl who finds her mother dead from a drug overdose and has to go with her six year old sister to foster care. Enter their estranged father, a man they hardly know but for the stories they've heard from their mother. As it turns out, their dad is in a bit of trouble with the wrong people. The story is action packed, moves quickly, and does a great job of portraying the main characters conflict about her relationship with her dad.