A Leper on Steroids

If you or someone you know has suffered with eczema, then you understand that it's horrible and terrible.
Ours is worse.
Okay, I don't really know that ours is worse, but if yours is worse than ours, then you are have some seriously terrible skin and we should form a support group together.
We constantly battle the boys' bad skin. It looks good, then it flares, then it looks awful, then it's good, and such is our life. We valiantly fight staph a few times a year, but that's the only really exciting part. Our pediatrician has always done a good job helping us manage, and two years ago we went to the allergist who discovered both boys have egg allergies and Keaton also has a peanut allergy. In addition, Keaton is allergic to pretty much everything they tested him for (except cockroaches...weird), and he's been taking allergy shots since he was three. He is the best allergy-shot-taker in the world, and he has never cried. The allergy discovery pretty much cleared up Keaton's major skin problems, but Tucker is a different story.
As I said, we have always managed it. But last year, in first grade, I think he started to notice that everyone else didn't look like a leper, too. Then, in summer baseball, we noticed the other kids asking Tucker about his skin, and we decided that we'd exhausted the resources of the pediatrician and allergist and it was time to see the dermatologist.
We did not, however, see the dermatologist in the way that we planned.
In early July, Tucker a little bit of nasty staph on his skin. We can tell because we think we're doctors.  Keaton had staph about two weeks before, which confirmed our diagnosis. Tucker took an antibiotic that didn't do the trick, so I hauled him in to the pediatrician again. They put him on bactroban and we went on our merry way.
Seven days later, we woke up to this all over his body (including his face): 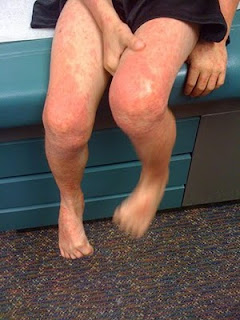 Sidebar #1: Yes, I am the mother in the doctor's office taking a picture of her son's condition with her iphone. At some point it occurred to me that we'll all wonder some day if it was really as bad as we remembered, and I wanted future verification.
He looked ridiculous. I called the pediatrician's office and took the first possible appointment. It wasn't our regular doctor, but I didn't care. The first pediatrician called in another pediatrician and a student doctor, and they together decided that he looked bad, and he needed to see a dermatologist quickly.
They prescribed him something for itching and made us another appointment. That afternoon we saw the dermatologist, who called in another dermatologist and a student, and together they worked through possible causes and treatments.
I think they think he had a reaction to the bactroban (which he had taken many times before) because it is a sulfa drug. Please consult your doctor before believing anything medical that I say, but I think our bodies have a sort of sulfa threshold, and when the body reaches its maximum capacity it reacts.  In Tucker's case, it reacts badly.
Sidebar #2: When you see six doctors in one day, you're doing something special. When we left the dermatologist's office he just shook his head and said, "One thing is for sure. I am certain that this is the worst case I'll see today."
In the days that followed, Tucker took a double dose of steroids, a large amount of anti-itch medicine, and participated in nightly "wet wraps" where we dipped his clothes in warm water, covered him with a steroid ointment, and them made him wear the wet clothes for 30 minutes, covering him in blankets straight from the dryer when the clothes started to make him cold. Good times.
Have you ever been around a seven year old with "roid rage"?  What about a double dose of it? Let me tell you friends, it ain't pretty.

not really.  Game three was a fun, exciting game and we lost by about two points, I think. It was just like summer baseball should be.

This post, rather, serves as the culmination of the previous two regarding acceptable baseball behavior.  The following are the rules for heckling in baseball.

1) Never, ever heckle your own kid. When the ball rolled right between his legs, he knew he should have stopped it. Screaming those directions to him at the top of your lungs in front of his teammates and their parents will not "drive the message home" but will instead serve to humiliate him. Acceptable responses to a son who misses a ball include, "Good try," "You'll get it next time," or even the helpful "Don't forget to get your glove on the ground." I find that the last one works best if you follow it with some term of endearment. For example, "That's okay, babe, get your glove on the ground next time and you'll have it!"

2) Don't heckle your own team. I know there are certain major league franchises who deem this acceptable, but I do not. The other night at the Bombers game our pitcher was having some trouble, and a group of teenage boys behind me starting yelling about how awful his pitches were. In my head, I told them to take their prissy little butts to the visitor side if they didn't like our pitching, but I did not say this aloud (you're welcome, Trey). Teams encourage one another. They do not insult and degrade one another. Take this as a life lesson, if you will.

3) Clapping when someone on the other team strikes out is acceptable only in high school games or above. I have no rationale for this, except that I'm making these rules and I like this one.

4) Heckling of the opposite team is acceptable only in post-high school and above and only if it's funny. For example, at the Bombers games, when the opposing team does something stupid (like miss an easy ball), the announcer plays a sound bite of Homer Simpson, "Ladies and Gentlemen, I give you your moron." I know it sounds mean, but it's pretty darn funny so it's okay in my book.

In addition, the folks that sit in front of us are very good at heckling the other team.  One night our opponent's short stop had something like four errors in a row, so the Bombers fans below us kindly suggested that perhaps their coach would like for that young man to play pitcher as well. And first base. And catcher.  I don't think this was mean, as they were clearly trying to get the athlete more playing time and a more diverse baseball experience.

5) Before heckling an outfielder who has missed a fly ball, first confirm that there are no injuries.  Cheering and congratulating the player for earning your team another run just seems crass if he's obtained a broken leg in the process. I'm sure a simple thank you note later will suffice.

Ah, baseball.  I never knew how much I enjoyed it until I was an adult with children of my own. The steamy summer nights, the intense competition, and the $2 margaritas on Wednesdays really bring me much joy. If only all fans would adopt these heckling rules, all of my baseball experiences will be perfect.