This is one of the best  books I've read in a long, long time.

Here's the first paragraph:
"Henry and I dug the hole seven feet deep. Any shallower and the corpse was liable to come rising up during the next big flood: Howdy boys! Remember me? The thought of it kept us digging even after the blisters on our palms had burst, re-formed and burst again. Every shovelful was an agony -- the old man, getting in his last licks. Still, I was glad of the pain. It shoved away thought and memory."

Now, how's that for an opener!

The story takes place after WWII in the Mississippi Delta. Two of the characters return from fighting in the war, one white and one black. The story centers around the families of both men, but it is so much more than that.

If I were still teaching, I would make kids read this book and then write a paper about morality as defined by society (ahh...the power!). In Mudbound, the good people believe strongly in ideals that go against everything we now view as basic human right. The bad people are, well, really bad, yet their behavior is allowed to continue because those around them are fearful of standing up to them or simply uncomfortable with the subject of race. We see how far evil and violence will go if good people choose to look the other way.  The chapter where Ronsel comes upon a concentration camp while fighting for the US during WWII will haunt me for a good long time. Through this painful scene, the author artfully ties in the injustices of Nazi Germany to the injustices of race prejudice in the Deep South.

Mudbound is told through several different narrators, which not only kept me glued to the pages but also shows Hillary Jordan's great craft as an author. There is tragedy and love and intrigue and even a laugh or two. In short, this is a fantastic book, and you should read it.

Addendum: This description makes the book seem very dense, and it's not at all. I would even call it a quick read. The voices of the various characters are quite conversational, so the book is actually pretty easy. I finished it in less than a week.

Approximately five weeks ago, I came home from work on Friday and decided to make cupcakes. Things have gone a little crazy since then.

Now, people often comment, "I don't know how you have time for things like that!"  The truth is, I don't. My house is messy. I often bring home paperwork from school on the weekends that needs to be done. There is laundry to wash and there are groceries to purchase. I should be working out. (I cancelled my gym membership because I was paying $45 a month and spending time chauffeuring kids to baseball and gymnastics and never making it to the gym. I am a quitter. I need a new exercise plan, but before I can plan I need time to actually implement the plan, and the aforementioned chauffeuring and other mom duties take up all of the time. Poor me. Did I mention I'm a quitter?)

I've never in my life been a procrastinator, but I think baking has become my form of procrastination. If I share the cupcakes with other people, then it's a random act of kindness instead of a random act of not-doing-what-I-really-should-be-doing-right-now.

Anyway, I got the idea from this link I found on Pinterest. It includes 31 unique cupcake recipes -- one for each day of the month. Now, if I made cupcakes every day for a month, I would have to do some shopping because none of my clothes would fit (and did I mention I quit the gym?). I could, however, make cupcakes on Friday nights, right?  On Friday nights I take time off from being the iPad Nazi, and my kids usually watch TV and play on their iPads uninterrupted for a good long while. Trey will come home and sit at the bar while I bake, and we have more conversation than we've had all week. There's something therapeutic at the end of the week about putting on my pajamas, blasting the Norah Jones Pandora station, opening a bottle of wine, and baking. Happy Friday to me. 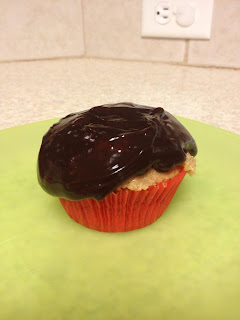 My first Friday cupcake was a peanut butter cupcake with peanut butter frosting and chocolate ganache. I feel like "sinful" is an appropriate word. Sometimes peanut butter cupcakes are dry, but this one was moist and delicious. I also can't get over the genius of TWO frostings. Seriously. Frost a cupcake and then put some chocolate on top of it. It's like whoever came up with this recipe is as smart as the inventor of double stuff oreos.

The next batch, made on March 8th, was Irish Car Bomb cupcakes. Now, I've never had an Irish car bomb, but this cupcake sounded creative and exotic and I wanted to make it. It's a Guinness cupcake (made with the beer) with Bailey's Irish Cream filling and Bailey's frosting. Trey said it was "strong" which makes me think he could taste the Bailey's. I think this is awesome because I really hate when you make something with a superstar ingredient and then you can't taste said ingredient. These were quite unique and yummy. 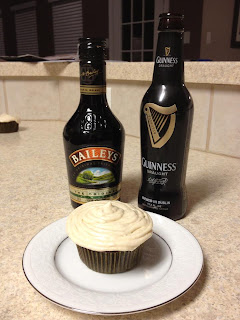 Then came my father-in-law's birthday which also happens to be on St. Patrick's Day. Each year I make him an Italian cream cake, but since it's St. Patty's Day it has to be green. I don't know if he really wants this each year or if it's just tradition now, but this is what he gets. Some years it turns out a little dry, and other years it's perfect. I think think this was a good year. 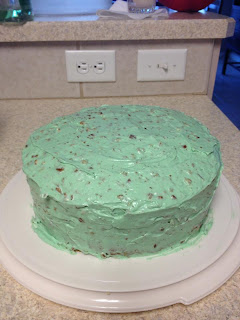 Then I needed to take something to our family Easter celebration. I've been dying to make this cake, but it seems silly to make it for just our family. I mean, I would EAT IT ALL a little at a time, and then I would have this terrible food remorse whenever I went to grab one more bite and realized the pan was empty. So I made it for Easter, and it was pretty darn good. The cake was decent, but the praline topping was the best part. I cooked it a little too long and the consistency was a little too thick when I put it on the cake. It should have oozed down the sides more, and it would have been prettier if that had happened, but it still tasted great!  I think I'd like to try this gooey chocolate cake recipe I have and then add the praline topping to it. It would be even richer and creamier. It's called New Orleans Double Chocolate Praline Fudge Cake. 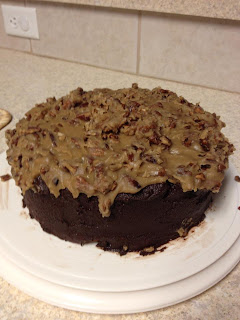 The first cupcake of April was sort of at Trey's request. He saw a recipe somewhere for cupcakes that are like those old school Hostess cupcakes with cream filling, chocolate frosting, and that little white squiggle on top. I've had this recipe for a while (it came from the 31 days of cupcakes list), and I decided to give it a shot. It wasn't too pretty on top, but when I broke it open and dug in, it looked like it should - creamy and delicious! 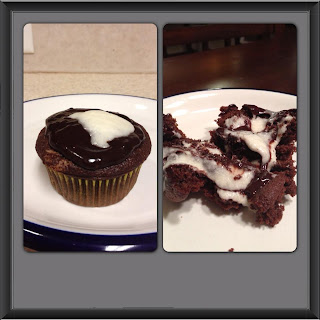 This week I had a difficult time deciding between nutella madness cupcakes and caramel macchiato cupcakes. In the end, I went with lemon cupcakes with raspberry filling and lemon frosting. It's a cupcake that tastes like summer! It's also one of my prettiest creations to date. This one is especially fancy because I actually bought and used cake flour for the first time. I think the cake is a little lighter than it would have been had I used my normal all purpose flour, and the cupcakes didn't rise as much as some of my others. I think I've learned what end result I can accomplish with the cake flour, and I may or may not use it in future recipes. 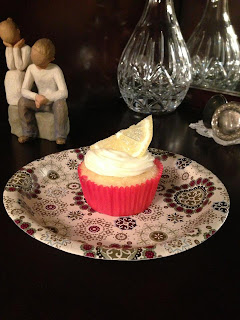 What's up next?  It's so hard to decide!  I really want to try these Elvis cupcakes, mostly because they seem like something Trey would really like. But I still haven't made the nutella madness or caramel macchiato. These decisions may just start keeping me up at night.
at 10:59 AM No comments:

I keep saying I don't read much non-fiction, but I think this is my second one this year. I really loved O'Reilly's Killing Lincoln, so I decided to read his similar book about the assassination of President Kennedy. It was good as I expected.

Before reading the book, I felt like the Kennedy family's reign over US politics was riddled with mystery. There is just so much that the general public will never know about JFK's election, Bobby Kennedy's role in his presidency, and the apparently dysfunctional relationship that JFK had with his father. The book sheds light into some of these mysteries, but when the evidence reaches a dead end, O'Reilly recognizes this and moves on.

I may have wanted more scandal than the book provided, but I did learn a great deal. Killing Lincoln reads like fiction to me -- the stories of Lincoln and Booth intertwined as the reader anxiously awaits the crossing of their paths. Killing Kennedy has some of that; however, it reads much more like I would expect from nonfiction.

I liked Killing Lincoln better, but this one was interesting, too. I think Mudbound by Hillary Jordan is up next.
at 9:23 PM 1 comment: