When it Rains, Part Three

We entered the park, full of glee, and headed to the food area. A catered dinner was part of the package deal, and our designated meal time was quickly nearing its end. We feasted on mass produced barbecue and cole slaw, and many attempts were made to give away the packaged hard-as-a-rock oatmeal raisin cookies that served as dessert. Not me, though. As soon as I realized the "raisins" were actually raisin-like flakes with no gelatinous consistency whatsoever, I ate every last bite.

Finally. Finally it was time for the main event -- roller coasters! I must start this part of the story by saying that I have nothing against roller coasters. I've even spent many days of my life being exhilarated by the ups and downs and arounds of the roller coasters at that very park.

It's the heights I dislike. More specifically, it's being hurled toward the ground from sixteen stories up at a high rate of speed that I dislike. Something about that is clearly unnatural and, dare I say, dangerous.

In addition, I dislike being spun in a circle at a high rate of speed. More specifically, I dislike feeling like I'm going to puke.

As I'm sure you can already tell, I was a barrel of fun at Six Flags.

Our group neared the first death coaster, and I kindly volunteered to hold everyone's stuff while muttering something about pawning all of their cell phones for cash if they plummeted to the afterlife on the crazy thing. I'm sure I threw in a "don't say I didn't warn you" somewhere in there, too.

Thus I became the "hold our bags" person. I was quite glad to take on this role because it removed some of the stigma of being a coward (although I like to think of it as being a rational human being). As the kids and other sponsors coasted up and down and around and up again, I manned fourteen or so backpacks, some cell phones, and a camera or two, all while convincing myself that I could totally win every arcade game in the park.

I studied the games. I marvelled at the giant prizes awarded for such simple feats as knocking milk bottles down with a baseball. I watched contestants and critiqued their performances in my head, silently cringing as they attempted an underhand throw when clearly an overhand throw was the only solution.

Yes, I held stuff and pondered my own imaginary arcade abilities for several hours.

As we began to exit the park, Tiffany reminisced about the year that her feet were so tired that the StuCo president gave her a piggy back ride all the way to the car. Of course, the natural progression of that thought was an announcement that we should have a piggy back race.

"Hogan and Caleb will carry us, and it will be SO FUN!" she announced. (Hogan and Caleb are our esteemed colleagues, often referred to as "the boys," and we love them.)

Then she asked Caleb which one of us he wanted.

I'm still pretending not to be offended that he picked her. Interestingly, people get Tiffany and me confused at school all the time, and at some point in the fall when we were getting healthy together we discovered that we not only have the exact same measurements, but we also weigh exactly the same -- somewhere around 105 if I remember correctly.

So Hogan got stuck with me. Since I am older than Tiffany, I decided that I likely had a greater gravitational pull because of my longer time on the earth, and this provided us with a handicap. However, Hogan is tall and has really long legs. I estimated that this made up for any issues presented by gravity. If we were going to race, then Hogan and I were going to RACE. In case you don't know, I like to win stuff.

Based on the footage you're about to see, a few more people joined in, too. I lost count because I didn't care. They were all going to be behind us anyway.

Luckily, one of the StuCo kids was prepared to witness our greatness, and now all of posterity is graced with this video. Hogan and I are the team on your right at the beginning of the race as you look at your computer. I don't want to sound bitter, but I think you can tell we got the bad lane.

That's right. Our dedication to winning caused us to falter, and I became a woman down. I thought instantly that I had broken my tailbone, but I couldn't stop laughing long enough to figure it out.

Boy was I wrong.

When it Rains, Part Two

Thursday night. A quick dinner at the Steak and Shake (why don't we have one of those in College Station?), and then we were back at the convention center for the opening rally. This is interesting to me because each school running for office presents its platform in a one-minute speech. I think the highlight was the tiny little girl in her sky-high heels and business suit. Her school's slogan - "LEAD OUT LOUD!" - and every time she said a syllable of the slogan she cast her arms into the air just like a little dictator. She entertained me.
Next came the keynote speaker of the evening, Keith Hawkins. He conveyed his message beautifully as he encouraged students to not see others for who they are but for who they can become, to practice kindness even when it isn't earned. He described looking at life as a rent versus own situation, and encouraged us all to own our own lives, no matter how great or how horrible. He grew up in a difficult situation in which his biological father left and his mother married a drug addict. He lived his high school years not knowing where his next meal was coming from, and he described the way he began to "own" his situation and ultimately own his future.
Of course, I cried thinking of all of my students who SO need to hear this message. I fantasized about bringing him in as a guest speaker and my students choosing to step up and own their own futures, and the wonderful, life-changing day that would be. Then I realized it probably costs a fortune to have him speak and came back to reality.
After the rally, we were back to the hotel and the kiddos were all tucked safely into their beds (or at least room-checked) by midnight. This was my third consecutive night to stay up past midnight (I didn't mention the Farr and Tiffany keeping me up well after one a.m. the night before just talking), and I was starting to feel it.
Friday morning we left the hotel by 7:15 and stopped at the Quick Trip for breakfast yet again. The QT is quite the phenomenon, and I need someone to open a QT here in College Station. The plethora of flavored coffees, breakfast sandwiches, donuts and pastries, and general good cheer would make a killing here. Entrepreneurs, you can thank me later.
We watched campaign skits all morning. All I'll say is this: These were, for the most part, mediocre compared to the professional presentation our kids put on last year. (I'm not biased or anything.)
Because our school was responsible for balloting immediately after lunch, we didn't really have time to eat our own lunch. Not discouraged, we each took our rented vans to different local establishments and had our kids order to go. All but one van ended up at Sonic (Farr's van stopped at a gas station taco place - apparently they were the brave group), and we made it back in record time.
Tiffany passed out assignments to our fabulous, super-responsible, ballot-taking kids, and we sponsors stood around looking useful (me pretending to grade again) until we were dismissed for a few hours while the kids attended table talks. I really needed to get those timed writings done, and I was so motivated that I spent the afternoon doing this: 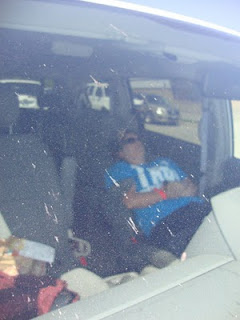 Thanks, Tiffany, for getting a pic of my slumber. It was heavenly.
Friday night, Six Flags, and the injury of the year (with video) is to come. Check back for part three!
at 6:11 PM 1 comment:

Last week I had the pleasure of accompanying the Consol student council to the Texas Association of Student Councils State Convention in Arlington, Texas. Consol is serving as the state secretary school this year (you can read more about the road to state office here), so there were some additional responsibilities besides just being convention-goers. I was glad for the chance to travel with some great kids and great friends to see our school do great things.

The trip began with a Ranger game at the Ballpark. It was freezing, but it was a fabulous time. I think the best part was that the girls who were sitting behind me had not been to a baseball game before. They bought foam fingers and cheered their little heads off. We had to help them out with a couple of the basics (sorry, girls, you're not supposed to root for the other team's batter unless you want us to get beat up by the drunk guys ten rows up), but they were instant baseball fans.

The next day was a bit slower for everyone except our StuCo sponsor and President, as they were up and going at the crack of dawn. We met them for lunch at Razzoo's (one of my all-time favorite restaurants) and I was happy to see that the kids appreciated the ridiculous menus and super-spicy Cajun deliciousness of the place.

Thursday afternoon found the kids browsing the campaign booths at the convention center while I sat in the hospitality room pretending to grade timed writings. I say pretending because by this time I was tired. I had been up past midnight for about three nights in a row preparing to be out of town and gone from school, and I'm kind of a baby about my sleep. By 10:30, I like to be under the covers, pretty much without exception. I've always been this way, and I think it must have kept me out of some trouble when I was younger. I just didn't want to stay up late enough to do anything too crazy.

Anyway, as I re-read the same timed writing for the third time, Scott (another StuCo chaperone/fan extraordinaire, like me) came running into the hospitality suite. "Tiffany says we have to come into the big meeting room right now!" We're not crazy -- when it comes to StuCo we do what Tiffany says, when she says to do it, so off we ran.

About three minutes later I found myself standing this close to Jason Castro. He was there to promote awareness for an organization that fights malaria across the world. I'm sure he couldn't have admitted it to the group, but I know in my heart he was singing directly to me. I am quite in love with my husband, but I must say that my new friend J.C. (that's what I like to call him now) is a beautiful, beautiful man. He sang. We swooned. It was awesome.

But this impromptu interaction with a star was only a glimpse of the crazy ride the weekend would turn into.
at 2:27 PM 2 comments: