My last official day of work for the summer was last Thursday. I'm a free woman until July 30th, and, as usual for me in the summer, I've become obsessed with doing "stuff." Exactly what that is changes from day to day, but it's like I can't do enough things that have nothing to do with school.

Project #1 - my office door wreath. I actually bought the stuff for this with a gift card I got for my birthday way back in April, but I just finished it last weekend. The wreath I had on my door was very brown, so I needed something with brighter colors for the summer. 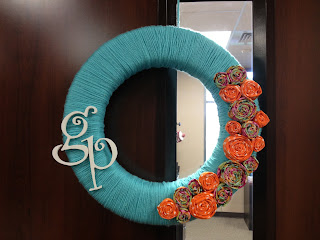 The flowers came about as a result of this tutorial I found on Pinterest. The letters I just bought at Hobby Lobby and painted white. I intended to put the letters a little higher, but I wasn't convinced that hot glue would hold them on, so the first time I tried I didn't pay much attention to where I put them. Whaddaya know!  They stuck the first time, so they stayed put. I really super love this wreath.

Project #2 - a Kindle Fire case for my niece Peyton. She got a Kindle for her birthday, and we were supposed to get a case to go with it. After shopping lots of places, we discovered that there aren't really any cute cases at local stores (I'm sure there are some online). So we bought a functional case at Best Buy, but then I used the instructions here to make a case that looks more like a little girl's. The tutorial is for an ipad case, so I adjusted the measurements. I didn't put the velcro down low enough, so I had to add some adhesive velcro and hand stitch it in. I hope it stays! 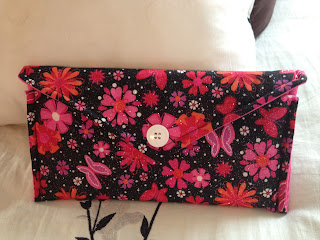 I wish you could see the glitter in this picture - it's not just pink and flowery, but glittery, too!  I had so much fun making this case that I bought some quilt squares today on a fabric store trip so I can make some more. I'd like to try adding a strap so it's more of a purse-y carrying case, but I haven't totally thought that through yet. I'm not sure what I'll do with them once I have them made, though. I spent less than twenty bucks on enough stuff to make three or four cases. I figure it's a good investment on my summer leisure time. Anybody need a Kindle case?

I love to bake, but eating healthy foods doesn't exactly lend itself to making cookies, so I haven't baked too much lately. I splurged this weekend, though, since we were going to visit my new niece, Charli Rane, and I cooked up a few sweet treats. The cream cheese oreo cookies were very easy, and they were delicious, if I do say so myself!  I made sure to give away as many as I could so we didn't eat them all. We had the cinnamon roll french toast bake for breakfast at mom and dad's, and it was good, too. It's a little dangerous, though, because you can just keep walking past it and picking off a bite at a time.

I've been saying for a while that I need to learn how to make jellies and jams. It seems like my parents are always making a new batch of something, and I want to learn. I had what I thought to be lots of jalapenos from my garden, so I asked dad to make some jalapeno jam with me so I could learn how. Here's the recipe we started with. It turns out I didn't have quite enough jalapenos and sweet peppers (we used these), so we improvised and made up the difference with pickled jalapenos. It was a happy accident because the jam is mouth watering!  Hot and spicy and sweet all at the same time!  I also helped dad with a few batches of grape jelly - he picked the grapes himself the day before and this is the best grape jelly I've ever had. It's perfect! (I've decided I need to keep an eye out on Craigslist and at garage sales for a canning set up, so I can try it by myself.) 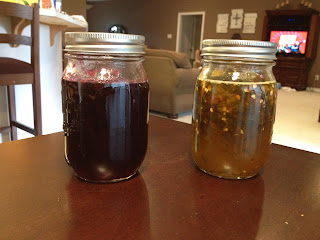 And then there are the two food fails of the weekend. For dinner tonight I planned to make a stuffed cheddar meatloaf in the crock pot. I didn't get it in the crock pot this morning, though, so I decided to just cook it in the oven. That part was perfectly fine. The meatloaf even tasted pretty good. The only problem was with presentation. This will forever be known to me as "Severed Leg Meatloaf." 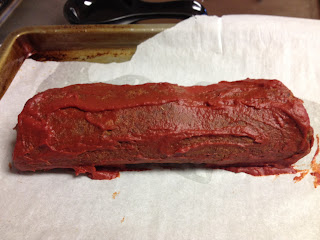 I mixed up the meatloaf, spread it flat with waxed paper, added slices of cheese on top, and rolled it up. I cooked it at 325 for 40 minutes, then added the tomato paste on top and cooked it for 5 more minutes. It tasted good (for something that looked like a recently lost limb).

And finally, there was this recipe for grilled eggplant and tomatoes I found on Pinterest. I'm trying to find new vegetables to add to my repertoire, and I've never purchased, cooked, or eaten an eggplant. It seemed easy enough, so I thought I'd give it a go.

Here are the problems I had. 1) I love feta cheese, but when you first open a container of it, it smells like farts. Sorry for being crude, but there is no other way to describe it. 2) Eggplant sort of tasted like cucumbers to me, and I'm not a fan of cucumbers. 3) I didn't exactly follow the recipe. They were minor adjustments, but I just did things a teeny tiny bit differently than it said to.

The resulting dish looked beautiful and healthy and delicious, but to me it was just farts and cucumbers. 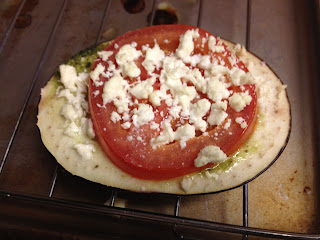 Now, what to do next?  I really like this bag, and I may have to try to make it. I have another project in mind that involves a large piece of wood and some skill with the saw I got for my birthday. I'd also really like to learn to make bread and butter pickles using my grandmother's recipe.