I am 35 years old, and today I did something I've never done before.

I had an intimate relationship with a 4 1/2 pound chicken.

Back story:
Occasionally the boys or some other kind person will ask me what my favorite part of summer is. I usually answer that it's spending more time with my boys or reading book after book or just being without a schedule for a while.

The truth, however, is that my favorite part of summer vacation is Kathie Lee and Hoda.

I love them. I laugh uncontrollably when they are on tv. Sometimes I schedule my day so that I can be in front of the tv between 10:00 and 11:00, so I don't miss a single second. They are my tv best friends. I want to be on their show so that it's the Kathie Lee and Hoda and Stormy show. I want to drink cocktails at 10 a.m. and say what I really think on national television.

Case in point: Today, the healthy food guest brought on some crap that she claimed was a powder that you mix with water and it tastes just like Nutella but only has like negative 600 calories or something. Kathie Lee wouldn't even try it because she "doesn't trust powders." Hoda tried it quickly and then swigged her cocktail of the day.

I could have someone do my hair and then sit on tv with a cocktail telling people when food is gross!  I totally could! They should fly me in a couple of times a month to do book reviews or to try new recipes for the first time on air. We could be great friends, I know it!

So, my summer guilty pleasure is pretending to be on Kathie Lee and Hoda. I won't admit to setting up a card table and chair in my bedroom with a cocktail in a pretty glass and talking back to the tv, but let's just say it's crossed my mind.

Back to the bird.

Yesterday, New York Times food columnist Melissa Clark demo-ed three recipes that everyone should know how to do. One of them was the perfect roast chicken. Being the task-oriented, instant gratification person that I am, my favorite part of this recipe is that it only takes 45 minutes. I bought a chicken when I grocery shopped this week, so I decided to give it shot.

Here's the problem. Raw meat grosses me out. I never, ever, ever touch it. I cook plenty, but I always use tongs so that I don't have to make actual physical contact. Also, I've never cooked a whole chicken by myself because it is the epitome of raw meat grossness.

Who thought, "Hey, what are we going to do with this chicken's heart and liver?  Oh, I know! We'll stuff it back up the chicken's butt and let the person who buys it figure out what to do with it!"

For this reason, Trey always manages the raw chicken and its parts. I usually leave the room and come back when it's done and deboned so that only delicious, fully cooked white meat chicken exists in my world.

But I was inspired my my idols, Kathie Lee and Hoda, and I decided that today would be the day I formed an intimate relationship with a chicken.

I asked Tucker to document the occasion. Clearly he needs a little more practice before his career as a photojournalist.

Here's a blurry picture of me and my chicken. 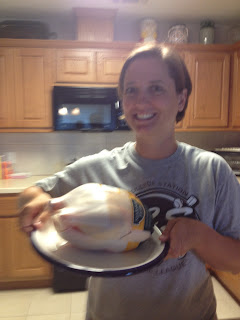 I unwrapped it and inspected the contents of the chicken's interior. I knew I had to remove the guts, but I just didn't think I could it. It was so slimy and disgusting looking. My stomach turned and I felt a little sick. I thought about just throwing the whole thing in the trash. Then I thought about putting it back in the fridge until Trey got home.

Finally, I decided that maybe I could just shake the guts out of the chicken onto the packaging so I wouldn't have to touch them at all. I grabbed that baby's little legs and shook the heck out of it. 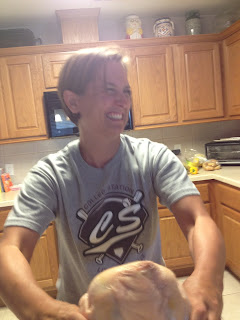 Sure enough, that nasty stuff just slipped on out. I expected a heart, liver, and neck, but I didn't see a neck. This concerned me a great deal. Can you imagine starting to eat a chicken and discovering a neck sticking out a thigh or something?  Ew.

I inspected the empty chicken hole, and saw no neck, so I hope it didn't come with one. 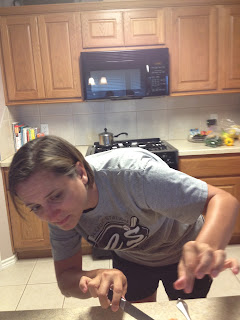 I thought I should do something to add some flavor. The NY Times columnist added lemon, but I didn't have any lemons, so I added some cloves of garlic and jalapenos. Somehow I managed to toss these into the chicken's hoohah without ever touching it. I'm pretty proud of that.

Here's my masterpiece, pre-cooking. If you see a neck hiding somewhere in this picture, please call me right away. 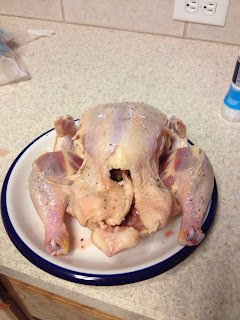 This is a link to the video from the show, and this is the link to the columnist's article which has WAY better directions, such as the temperature of the oven.

And, here, friends, is my very first roast chicken! 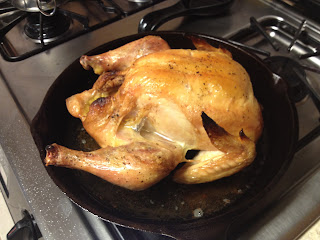 See, I should totally be on Kathie Lee and Hoda and Stormy. Where's my cocktail?
at 3:37 PM