The family on Christmas morning - all of us in our Christmas jammies! 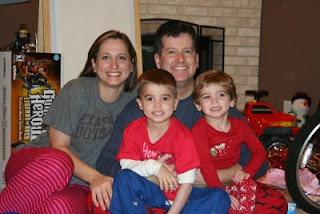 My sweet boys show off their Christmas morning pjs. 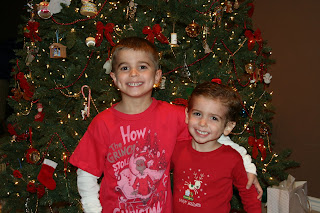 Tucker and Keaton got their daddy a bike so they could all go ride together. They were so excited to wheel it in to him! 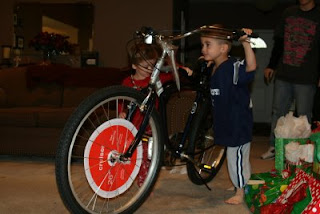 Keaton's favorite gift was the new truck Santa brought him. He's had a blast with it inside, but I can't wait until it stops raining long enough to park it outdoors! 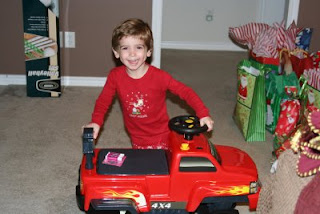 Of course, Tucker has most enjoyed his Backyard Football game for the Wii, his new Cowboys uniform, and his new Nerf Cowboys football. He says he can throw great spirals with this ball, and most of the time he can. Sidenote: Keaton also got a Cowboys jersey - the very gift that Tucker convinced him to ask Santa for. It wasn't the right number, but Santa did his best. 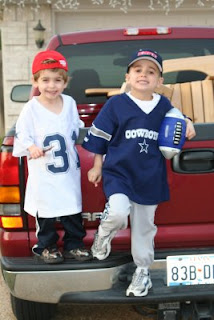 Then we have the Fathead that Santa brought Tucker. It's a lifesize cutout of Andre Johnson, one of his favorite players for the Texans. You can also see the Texans logo Tucker made himself and taped to the wall in the bottom right corner. He is proud about the fact that he comes up to Andre's elbow. (and Keaton never missed a photo opportunity) 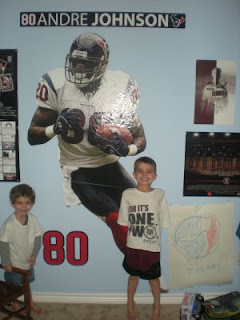 And finally, my favorite non-person-having picture. The Fathead came with lots of other little vinyl stick-ons, including the player's name and number (which you can see in the above picture). It also came with this stick-on that says "Are you fan enough?" Tucker promptly pasted the sticker on the playroom door, and then, in true Tucker fashion, answered the question. I'll be laughing about this for a long, long time. 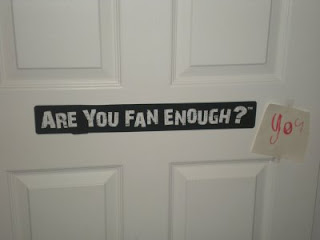 Check out all the family Christmas pics here.
at 3:35 PM