That time Trey tried to kill me in Cabo

We love vacation. More recently, Trey and I love vacation, and our boys have flashes of fun in the midst of being grumpy teenagers. This summer we made our second trip to Cabo San Lucas, and it was even better than the first time we went.

In case you weren't aware, I enjoy eating and drinking and food and drinks probably a little more than a normal person. So naturally we had to go back to The Office, my favorite restaurant from our trip three years ago. I had chilaquiles for the first time there, along with a Bloody Mary to write home about. I've made chilaquiles several times since then, but going back to the original seemed like a great way to perfect my technique.

(Here's a recipe in case you're interested. FYI - You've got to have verde sauce, chicken, and an over easy egg or you're just not doing it right. Make your own tortilla chips for extra credit.)

Our first trip to The Office three years ago includes one of those vacation stories of misery that we all have. We could see it from our resort. It didn't look that far. We decided to walk. It was hot, and we were hungry. But it was far. I'm pretty sure it ended up being twenty-seven miles. The only saving grace is that we didn't kill each other on the way. That walk was so, so terrible. We may not have spoken to each other again until we got back home.

This year we knew better, and Praise the Lord for taxis. We had the good sense to let someone drive us. I ordered my favorite dish and we relished the cool Baja morning together. We laughed and smiled and basically lived in the happy ending of a Hallmark movie for the whole meal. I even have pictures to prove it. 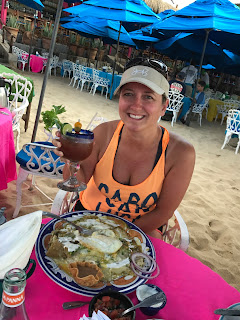 Wait. The only picture we have is of just me. And my food. Isn't that a beautiful plate? It's possible that I ate it all. Don't judge.

I promise everyone else was happy, too.

The Office is as on the beach as a restaurant can be. Your feet are in the sand, and on one of our trips they had to move a neighboring table because the waves were rushing under it. So after our idyllic breakfast we walked out a little closer to the water. Trey looked down the beach toward our hotel and said the words that changed our lives forever. Or maybe just for the morning, but whatever.

"You know, last time we walked it was so hot and we were all hungry. Now there's a nice breeze and we're full and happy. Let's just walk back and enjoy the morning."

Basking in the joy of our full bellies and happy family time, entranced by the waves crashing along the Sea of Cortez, we set out along that brutal journey.

For a while we were happy. We strolled. The boys walked close to the water where the sand was packed down, and then they ran from the larger waves as they came close. There was laughter and frivolity for a short while.

And in an instant it was over. My feet began to sink ankle-deep in sand with every step. Keaton started complaining about his knee. (Sidebar: The pediatrician suggested an MRI the week before we left, but we had plane tickets and decided he would probably be fine to wait until after Cabo as long as he took it easy. Because we're parent rock stars.) Tucker kept repeating, "We should have taken a cab...We should have taken a cab."

I thought, "No kidding, genius. But it's too late now and we're screwed." But I didn't say that out loud because parent rock stars.

Trey had that look on his face that he gets when he thinks he might be in trouble. When telling my parents this story later he said, "I don't get in trouble very often, but I always know when I am."

He was trying to be positive. "Look at the progress we're making! It looks so close now!" And I said many, many bad words in my head.

At one point about halfway there I stopped. I looked around and appreciated the beauty of the beach, the mountains, the ocean. I remembered how much I love this place and how peaceful it makes me feel. Trey noticed that I stopped and asked if I was okay.

"Yep. I just decided to lay down on this beach right here and die. It's a happy place. I'm headed to Jesus. See y'all later."

He didn't think that was a good idea. We pressed on.

In his defense, we did keep getting closer. I completely tuned out my suffering children (they are old enough - this was an "every man for himself" situation). I felt hope rising in my chest. I could do this! We were almost there! And as we approached our hotel, I stopped again to revel in our victory.

That's when I looked up and realized it wasn't our hotel. Our hotel was still eleventy billion miles down the beach. More bad words in my head. Many, many more.

At that moment, the largest wave we had seen all morning came crashing to the beach. It was a sight! I was stopped at the back of the pack, Tucker and Keaton were ahead of me a bit higher up the beach, and Trey was a little ahead of all of us, closest to the water.

And the wave attacked him.

I saw it all like slow motion. As the wave crashed up the beach, it knocked Trey to his left to his knees. Tucker rushed toward him - it was a hero moment for the kid even though he never could have gotten there in time to help. Keaton yelled something like "Look out!," truly concerned for Trey's safety.

Being the kind and helpful wife I am, I yelled, "Make sure your phone isn't in your pocket!" I sort of mimed it, too, with hand motions and everything. Because that's just how helpful I am.

Trey got his bearings quickly and stood back up just in time for the wave to attack him again on its return to the ocean. Down he went once more, this time flat on his butt. He was completely and unequivocally soaked.

And then we laughed. A lot. Trey said, "I guess I'm not in trouble anymore?" I agreed that the universe had punished him enough for his bad decision.

So we kept walking.

The boys decided it was easier to walk in another person's footprints, so Trey went first and we all tried to walk right in his steps. This helped with our misery a tiny bit.

A man came by on a horse, and I'm pretty sure he offered to give me a ride back to the resort. I'm also pretty sure I declined. It's also possible he was trying to sell me the horse. Or some drugs. I must have looked pretty bad.

Finally we made it back to the hotel. We all survived, and now we have the vacation story of 2017 that can be shared over Thanksgiving dinner for years to come.

Where did we go for breakfast the next morning? The Office. We took a taxi both ways.