So that one time I ran a marathon...

My 2015 goal was to become a runner. I looked back at some old posts and was reminded that on April 15, 2015, I could not run more than half a mile. I was frustrated and felt ridiculous.

One year, six months, and 26 days later I ran a marathon.

What follows are random thoughts about that.

1) I was persistent that people who run marathons are crazy, and I had no desire to run one. Then I ran three half marathons, and I got the urge to push myself a little farther. This is how the impossible happens - small steps of possible push you a little further until suddenly a ridiculous thing happens. Pretty cool.

2) A friend who also ran her first marathon immediately said she wanted to do another. She got a blister that caused her to overcompensate on one side and threw off her stride for much of the race. I got the feeling that she wants to do better. I have mad respect for that. But I'm all good. My marathon was not fast (5 hours and 43 minutes), but I feel like it's exactly what I trained for. I currently have no desire to do that again. Those half marathons sure are fun, though!

3) Throughout the week leading up to the marathon, I worried about several things. What if I fell off a curb, broke my ankle, and couldn't run? What if I got a stomach bug? What if it was 90 degrees on race day? What if I did my very best and was (gasp!) last? What if I physically couldn't finish? I literally prepared for months for those 5-6 hours of my life, and I had one shot. I don't experience that often. It was a real mental effort to stop worrying about factors out of my control, and probably something I need to practice.

4) Marathons are boring. For real. There are water stations with nice people and other runners for a while, but once everyone spreads out it's just you, your running partner (more on that later), and one foot in front of the other. We decided to make it to 20 miles before putting in headphones because we knew we'd need a distraction.

I had downloaded two podcasts from TED radio hour. Wouldn't you know it! The first guest that I listened to was a researcher who believes that outside our brains the only adaptation that gives us an advantage over animals is our ability to run with endurance! That's what helped ancient people survive! Humans weren't faster or stronger that animals, but they could endure without tiring out. I laughed out loud as I listened.

The second podcast (which I didn't quite finish) was about parenting, specifically over parenting vs. letting your kids learn how to navigate the dangers of the world. I spent some time thinking about my own parents and how they raised a person who thinks she can do any absurd thing like run a marathon. I hope I'm doing that for my own kids.

5) I ran as part of Team Mercy Project, committed to raising money for the organization that works to free child slaves in Ghana. It gave a little more meaning to the time I was spending on training and obsessing. At the end of the race, giant posters lined the road with the faces of the 80 children who have already been freed. I was overwhelmed with emotion, but quickly realized that if I started crying I would stop breathing! I was fresh out of energy and air and everything else in that last stretch. Those smiling faces are a great sight after running 26.2 miles.

6) My school family is amazing. Not only did they hold a bake sale to raise money for Mercy Project and my race, but they presented me with this amazing book with photos of the kids and words of encouragement - even a poster that Trey brought to me during the race. It's overwhelming how thoughtful these people are. I made a crazy decision to run a marathon, and for months they've listened to me talk about it, plan for it, and obsess about it. Honestly, I'm sure I was a little annoying with my obsession, but rather than making me feel that way they went out of their way to send me off with well wishes and mementos. Several people even texted me during the race. I learn so much from them every day.

Also, I really had to finish knowing that 600 kids and 70 staff members would be asking me about it on Tuesday!  Ha!

7) In case you didn't know, Trey Hickman is a saint. I decide to do crazy things that take up lots of time and he helps me find a way to make it happen. This goes way back to teacher certification, masters degree, that year I spent working in Austin on the weekends being an online teacher, and now a marathon. I got up too early every weekend and left to run. I woke him up, ran for hours and left him to take care of whatever was going on at home. He never once complained. He believes I can do anything and supports me no matter what I take on. He's the best.

It's been an interesting experience with my kids. As I increased mileage, they would give me a hard time and tell me they could totally do that, too. Then I hit about 20 miles and they changed their tune to decide I was nuts. When Tucker looked at the race map the night before, he said, "That's a long way. Are you sure you can do this?" (Thanks for the support, man.) After the race, Keaton said, "Wow. I was a little concerned but you did it!"

And I love that. I love that they can look back at their mom who is probably old and uncool to them and see that I can run a marathon. And if I can do that, they can do anything. Anything!

8) Finally, Erin. Erin is strong and athletic and has run eight marathons (now nine). When Erin learned a year and a half ago I wanted to run, she ran with me. She helped me train for my first half, then my second. She told me that I could run a marathon, and then she signed up with me. She sent me a training plan on August 25th, and we stuck with it. There's something about knowing that another person is waiting for you at 5:30 on a Saturday morning that makes you get out of bed. Without her, I would have given up long ago.

We ran through good days and bad days, talked every week about life and work and kids, and just persevered. We even tried to run ten miles when it was 103 degrees, but that's a story for another day!

How I feel about the fact that a person would unselfishly give up the time to help me reach this goal is hard to explain. She could have trained harder and finished faster, but instead she stayed next to me. It's kind of unremarkable for her - it's just who she is. And I am honored to be her friend. During the marathon a couple stopped us and asked if we were sisters. I told them that we've been friends long enough that we might as well be. Love you, Erin! 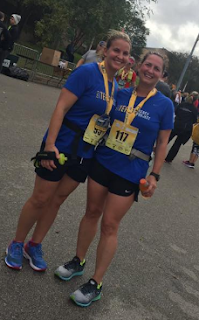 And that's a wrap. I ran a marathon. For real.